Similar to light detection and ranging (lidar), profile radar can detect forest vertical structure directly. Recently, the first Ku-band profile radar system designed for forest applications, called Tomoradar, has been developed and evaluated in boreal forest. However, the physical relationships between the waveform and forest structure parameters such as height, leaf area index (LAI), and aboveground biomass are still unclear, which limits later forestry applications. Therefore, it is necessary to develop a theoretical model to simulate the relationship and interpret the mechanism behind. In this study, we extend the Radiosity Applicable to Porous IndiviDual objects (RAPID2) model to simulate the profile radar waveform of forest stands. The basic assumption is that the scattering functions of major components within forest canopy are similar between profile radar and the side-looking radar implemented in RAPID2, except several modifications. These modifications of RAPID2 mainly include: (a) changing the observation angle from side-looking to nadir-looking; (b) enhancing the ground specular scattering in normal direction using Fresnel coefficient; (c) increasing the timing resolution and recording waveform. The simulated waveforms were evaluated using two plots of Tomoradar waveforms at co- and cross- polarizations, which are collected in thin and dense forest stands respectively. There is a good agreement (R2 ≥ 0.80) between the model results and experimental waveforms in HH and HV polarization modes and two forest scenes. After validation, the extended RAPID2 model was used to explore the sensitivity of the stem density, single tree LAI, crown shape, and twig density on the penetration depth in the Ku-band. Results indicate that the backscattering of the profile radar penetrates deeper than previous studies of synthetic aperture radar (SAR), and the penetration depth tends to be several meters in Ku-band. With the increasing of the needle and twig density in the microwave propagation path, the penetration depth decreases gradually. It is worth noting that variation of stem density seems to have the least effect on the penetration depth, when there is no overlapping between the single tree crowns. View Full-Text
Keywords: forest structure; vertical energy distribution; short wavelength; radiosity model; penetration depth forest structure; vertical energy distribution; short wavelength; radiosity model; penetration depth
►▼ Show Figures 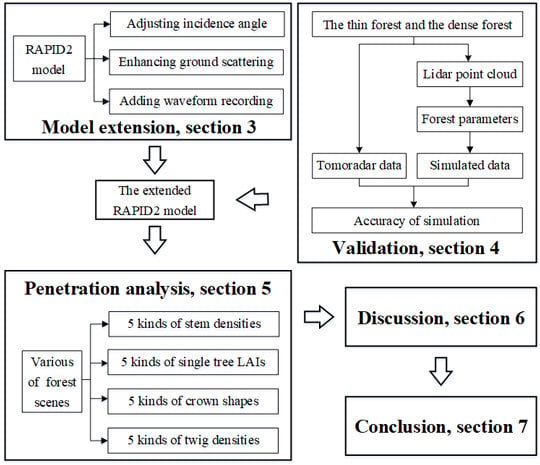