Editorial for Special Issue “Advances in Satellite Altimetry and Its Application”

For low Earth orbiting satellites, non-gravitational forces cause one of the largest perturbing accelerations. During a precise orbit determination (POD), the accurate modeling of the satellite-body attitude and solar panel orientation is important since the satellite’s effective cross-sectional area is directly related to the perturbing acceleration. Moreover, the position of tracking instruments that are mounted on the satellite body are affected by the satellite attitude. For satellites like Jason-1/-2/-3, attitude information is available in two forms—as a so-called nominal yaw steering model and as observation-based (measured by star tracking cameras) quaternions of the spacecraft body orientation and rotation angles of the solar arrays. In this study, we have developed a preprocessing procedure for publicly available satellite attitude information. We computed orbits based on Satellite Laser Ranging (SLR) observations to the Jason satellites at an overall time interval of approximately 25 years, using each of the two satellite attitude representations. Based on the analysis of the orbits, we investigate the influence of using preprocessed observation-based attitude in contrast to using a nominal yaw steering model for the POD. About 75% of all orbital arcs calculated with the observation-based satellite attitude data result in a smaller root mean square (RMS) of residuals. More precisely, the resulting orbits show an improvement in the overall mission RMS of SLR observation residuals of 5.93% (Jason-1), 8.27% (Jason-2) and 4.51% (Jason-3) compared to the nominal attitude realization. Besides the satellite orbits, also the estimated station coordinates benefit from the refined attitude handling, that is, the station repeatability is clearly improved at the draconitic period. Moreover, altimetry analysis indicates a clear improvement of the single-satellite crossover differences (6%, 15%, and 16% reduction of the mean of absolute differences and 1.2%, 2.7%, and 1.3% of their standard deviations for Jason-1/-2/-3, respectively). On request, the preprocessed attitude data are available. View Full-Text
Keywords: satellite attitude; precise orbit determination; POD; Jason satellites; satellite laser ranging; SLR; nominal yaw steering model; quaternion; altimetry satellite attitude; precise orbit determination; POD; Jason satellites; satellite laser ranging; SLR; nominal yaw steering model; quaternion; altimetry
►▼ Show Figures 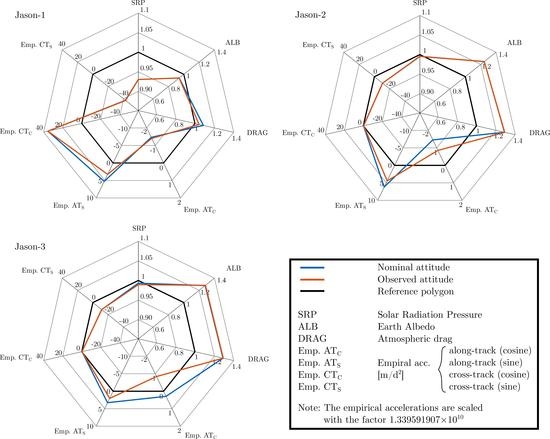