Investigations into the spatial dynamics of soil aggregate stability (AS) are urgently needed to better target areas that have undergone soil degradation. However, due to the lack of efficient alternatives to the conventional labor-intensive methods to quantify AS, detailed information on its spatial structure across scales are scarce. The objective of this study was to explore the possibility of using hyperspectral remote sensing imagery to rapidly produce a high-resolution AS map at regional scale. Airborne Prism Experiment (APEX) hyperspectral images covering an area of 230 km2 in the Belgian loam belt were used together with a local topsoil dataset. Partial least squares regression (PLSR) models were developed for three AS indexes (i.e., mean weight diameter (MWD), microaggregate and macroaggregate fractions) and soil organic carbon (SOC), and evaluated against an independent validation dataset. The prediction models were then applied to more than 700 bare soil fields for the production of high resolution (2×2 m) MWD and SOC maps. The PLSR models had a satisfactory level of accuracy for all four variables (R2 >0.5, RPD > 1.4), and the predicted maps were capable of capturing the fine-scale as well as the between-field variabilities of soil properties. Variogram analysis on the spatial structure of MWD showed a clear spatial organization at the catchment scale (range: 1.3 km) that is possibly driven by erosion-induced soil redistribution processes. Further analysis in restricted areas displayed contrasting spatial structures where spatial auto-correlation of AS was only found at field scale, thus highlighting the potential of hyperspectral remote sensing as a promising technique to investigate the spatial variability of AS across multiple scales. View Full-Text
Keywords: soil aggregate stability; APEX; hyperspectral imagery; spatial variability; soil erosion soil aggregate stability; APEX; hyperspectral imagery; spatial variability; soil erosion
►▼ Show Figures 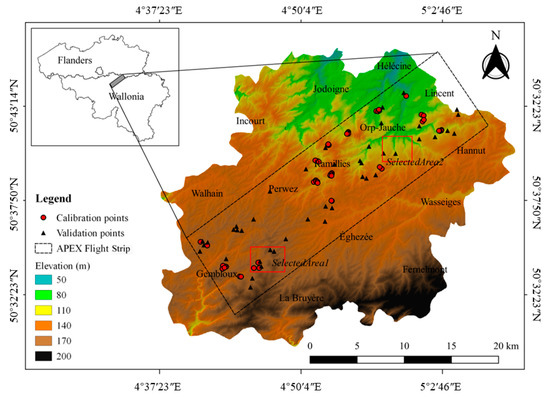