The Tharpakar desert region of Pakistan supports a population approaching two million, dependent on rain-fed agriculture as the main livelihood. The almost doubling of population in the last two decades, coupled with low and variable rainfall, makes this one of the world’s most food-insecure regions. This paper examines satellite-based rainfall estimates and biomass data as a means to supplement sparsely distributed rainfall stations and to provide timely estimates of seasonal growth indicators in farmlands. Satellite dekadal and monthly rainfall estimates gave good correlations with ground station data, ranging from R = 0.75 to R = 0.97 over a 19-year period, with tendency for overestimation from the Tropical Rainfall Monitoring Mission (TRMM) and underestimation from Climate Hazards Group Infrared Precipitation with Stations (CHIRPS) datasets. CHIRPS was selected for further modeling, as overestimation from TRMM implies the risk of under-predicting drought. The use of satellite rainfall products from CHIRPS was also essential for derivation of spatial estimates of phenological variables and rainfall criteria for comparison with normalized difference vegetation index (NDVI)-based biomass productivity. This is because, in this arid region where drought is common and rainfall unpredictable, determination of phenological thresholds based on vegetation indices proved unreliable. Mapped rainfall distributions across Tharparkar were found to differ substantially from those of maximum biomass (NDVImax), often showing low NDVImax in zones of higher annual rainfall, and vice versa. This mismatch occurs in both wet and dry years. Maps of rainfall intensity suggest that low yields often occur in areas with intense rain causing damage to ripening crops, and that total rainfall in a season is less important than sustained water supply. Correlations between rainfall variables and NDVImax indicate the difficulty of predicting drought early in the growing season in this region of extreme climatic variability. Mapped rainfall and biomass distributions can be used to recommend settlement in areas of more consistent rainfall. View Full-Text
Keywords: biomass; CHIRPS; NDVI; satellite rainfall; Tharparkar biomass; CHIRPS; NDVI; satellite rainfall; Tharparkar
►▼ Show Figures 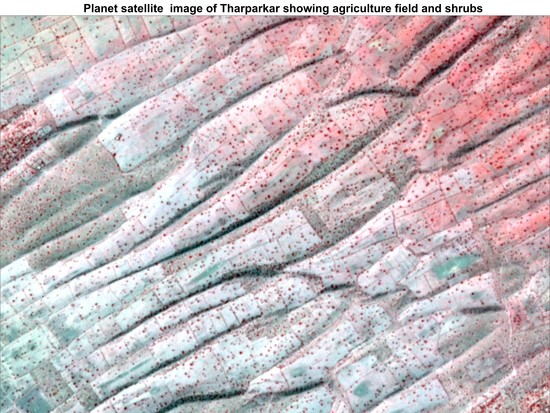 Usman, M.; Nichol, J.E. A Spatio-Temporal Analysis of Rainfall and Drought Monitoring in the Tharparkar Region of Pakistan. Remote Sens. 2020, 12, 580.


Usman M, Nichol JE. A Spatio-Temporal Analysis of Rainfall and Drought Monitoring in the Tharparkar Region of Pakistan. Remote Sensing. 2020; 12(3):580.


Usman, Muhammad; Nichol, Janet E. 2020. "A Spatio-Temporal Analysis of Rainfall and Drought Monitoring in the Tharparkar Region of Pakistan." Remote Sens. 12, no. 3: 580.