The use of medium resolution, open access, and freely distributed satellite images, such as those of Landsat, is still understudied in the domain of archaeological research, mainly due to restrictions of spatial resolution. This investigation aims to showcase how the synergistic use of Landsat and Sentinel optical sensors can efficiently support archaeological research through object-based image analysis (OBIA), a relatively new scientific trend, as highlighted in the relevant literature, in the domain of remote sensing archaeology. Initially, the fusion of a 30 m spatial resolution Landsat 8 OLI/TIRS Level-2 and a 10 m spatial resolution Sentinel 2 Level-1C optical images, over the archaeological site of “Nea Paphos” in Cyprus, are evaluated in order to improve the spatial resolution of the Landsat image. At this step, various known fusion models are implemented and evaluated, namely Gram–Schmidt, Brovey, principal component analysis (PCA), and hue-saturation-value (HSV) algorithms. In addition, all four 10 m available spectral bands of the Sentinel 2 sensor, namely the blue, green, red, and near-infrared bands (Bands 2 to 4 and Band 8, respectively) were assessed for each of the different fusion models. On the basis of these findings, the next step of the study, focused on the image segmentation process, through the evaluation of different scale factors. The segmentation process is an important step moving from pixel-based to object-based image analysis. The overall results show that the Gram–Schmidt fusion method based on the near-infrared band of the Sentinel 2 (Band 8) at a range of scale factor segmentation to 70 are the optimum parameters for the detection of standing visible monuments, monitoring excavated areas, and detecting buried archaeological remains, without any significant spectral distortion of the original Landsat image. The new 10 m fused Landsat 8 image provides further spatial details of the archaeological site and depicts, through the segmentation process, important details within the landscape under examination. View Full-Text
Keywords: fusion; image segmentation; archaeological landscapes; archaeological proxies; Landsat 8; Sentinel 2; object-based image analysis (OBIA) fusion; image segmentation; archaeological landscapes; archaeological proxies; Landsat 8; Sentinel 2; object-based image analysis (OBIA)
►▼ Show Figures 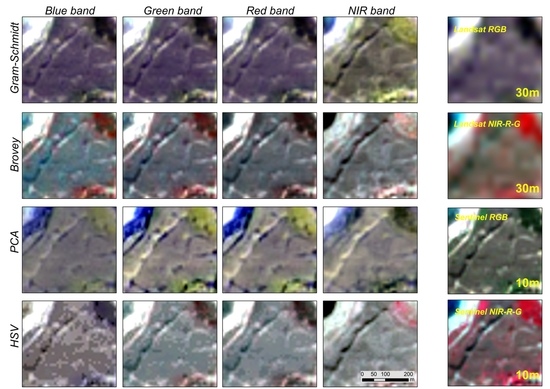