As an important energy absorption process in the Earth’s surface energy balance, evapotranspiration (ET) from vegetation and bare soil plays an important role in regulating the environmental temperatures. However, little research has been done to explore the cooling effect of ET on the urban heat island (UHI) due to the lack of appropriate remote-sensing-based estimation models for complex urban surface. Here, we apply the modified remote sensing Penman–Monteith (RS-PM) model (also known as the urban RS-PM model), which has provided a new regional ET estimation method with the better accuracy for the urban complex underlying surface. Focusing on the city of Xuzhou in China, ET and land surface temperature (LST) were inversed by using 10 Landsat 8 images during 2014–2018. The impact of ET on LST was then analyzed and quantified through statistical and spatial analyses. The results indicate that: (1) The alleviating effect of ET on the UHI was stronger during the warmest months of the year (May–October) but not during the colder months (November–March); (2) ET had the most significant alleviating effect on the UHI effect in those regions with the highest ET intensities; and (3) in regions with high ET intensities and their surrounding areas (within a radius of 150 m), variation in ET was a key factor for UHI regulation; a 10 W·m−2 increase in ET equated to 0.56 K decrease in LST. These findings provide a new perspective for the improvement of urban thermal comfort, which can be applied to urban management, planning, and natural design. View Full-Text
Keywords: evapotranspiration; urban heat island; RS-PM model; Landsat 8; thermal comfort evapotranspiration; urban heat island; RS-PM model; Landsat 8; thermal comfort
►▼ Show Figures 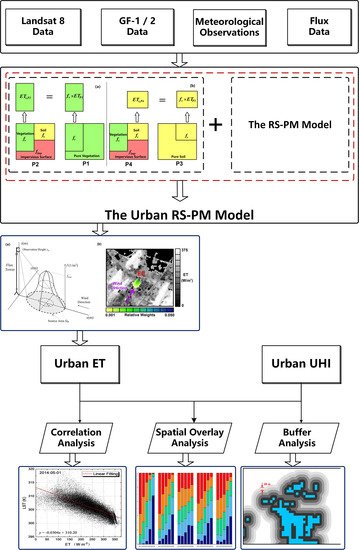