In this paper, we presented a method for retrieving sea surface wind speed (SSWS) from Sentinel-1 synthetic aperture radar (SAR) horizontal-horizontal (HH) polarization data in extra-wide (EW) swath mode, which have been extensively acquired over the Arctic for polar monitoring. In contrast to the conventional algorithm, i.e., using a geophysical model function (GMF) to retrieve SSWS by spaceborne SAR, we introduced an alternative retrieval method based on a GMF-guided neural network. The SAR normalized radar cross section, incidence angle, and wind direction are used as the inputs of a back propagation (BP) neural network, and the output is the SSWS. The network is developed based on 11,431 HH-polarized EW images acquired in the marginal ice zone (MIZ) of the Arctic from 2015 to 2018 and their collocated scatterometer wind measurements. Verification of the neural network based on the testing dataset yields a bias of 0.23 m/s and a root mean square error (RMSE) of 1.25 m/s compared to the scatterometer wind data for wind speeds less than approximately 30 m/s. Further comparison of the SAR retrieved SSWS with independent buoy measurements shows a bias and RMSE of 0.12 m/s and 1.42 m/s, respectively. We also analyzed the uncertainty of the retrieval when reanalysis model wind direction data are used as inputs to the neural network. By combining the detected sea ice cover information based on SAR data, sea ice and marine-meteorological parameters can be derived simultaneously by spaceborne SAR at a high spatial resolution in the Arctic. View Full-Text
Keywords: synthetic aperture radar; sea surface wind; machine learning synthetic aperture radar; sea surface wind; machine learning
►▼ Show Figures 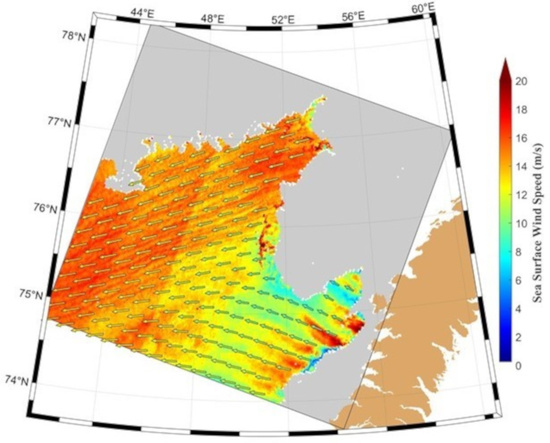