Coastal areas are usually densely populated, economically developed, ecologically dense, and subject to a phenomenon that is becoming increasingly serious, land subsidence. Land subsidence can accelerate the increase in relative sea level, lead to a series of potential hazards, and threaten the stability of the ecological environment and human lives. In this paper, we adopted two commonly used multi-temporal interferometric synthetic aperture radar (MTInSAR) techniques, Small baseline subset (SBAS) and Temporarily coherent point (TCP) InSAR, to monitor the land subsidence along the entire coastline of Guangdong Province. The long-wavelength L-band ALOS/PALSAR-1 dataset collected from 2007 to 2011 is used to generate the average deformation velocity and deformation time series. Linear subsidence rates over 150 mm/yr are observed in the Chaoshan Plain. The spatiotemporal characteristics are analyzed and then compared with land use and geology to infer potential causes of the land subsidence. The results show that (1) subsidence with notable rates (>20 mm/yr) mainly occurs in areas of aquaculture, followed by urban, agricultural, and forest areas, with percentages of 40.8%, 37.1%, 21.5%, and 0.6%, respectively; (2) subsidence is mainly concentrated in the compressible Holocene deposits, and clearly associated with the thickness of the deposits; and (3) groundwater exploitation for aquaculture and agricultural use outside city areas is probably the main cause of subsidence along these coastal areas. View Full-Text
Keywords: Land subsidence; MTInSAR; coastal areas; Guangdong; deformation time-series Land subsidence; MTInSAR; coastal areas; Guangdong; deformation time-series
►▼ Show Figures 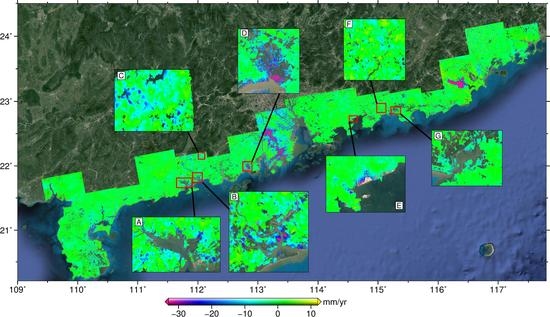