The underwater ancient town of Chunan is of great importance in archaeology and tourism. Hence, the efficient mapping and monitoring of the topographical changes in this town are essential. An attractive choice for the efficient mapping of underwater archaeology is the multibeam echo sounder system (MBES). The MBES has several advantages including noncontact survey, high precision, and low cost. In this study, the topographical changes of the ancient town under Qiandao Lake were quantitatively assessed on the basis of time-series MBES data collected in 2002 and 2015. First, the iterative closest point (ICP) algorithm was applied to eliminate the coordinate deviations between two point sets. Second, the robust estimation method was used to analyse the characterisations of the terrain variations of the town on the basis of the differences between the two matched point sets. Obvious topographical changes ranging from −0.89 m to 0.88 m were observed in a number of local areas in the town. On the global scale, the mean absolute value of the depth change in the town was merely 0.12 m, which indicated a weak global deformation pattern. The experiment proved the effectiveness of applying MBES data to analyse the deformation of the ancient town. The results are beneficial to the study of underwater ancient towns and the development of protection strategies. View Full-Text
Keywords: underwater archaeology; underwater ancient town; acoustic remote sensing technique; data registration; robust estimation underwater archaeology; underwater ancient town; acoustic remote sensing technique; data registration; robust estimation
►▼ Show Figures 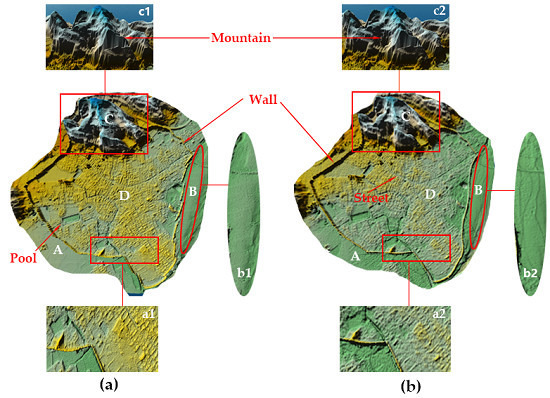