This paper investigates the possibility of using fusion Sentinel-2 imageries (2016, ESA) and light detection and ranging (LiDAR) point clouds for the automation of land cover mapping with a primary focus on detecting and monitoring afforested areas and deriving precise information about the spatial (2D and 3D) characteristics of vegetation for reclaimed areas. The study was carried out for reclaimed areas – two former sulfur mines located in Southeast Poland, namely, Jeziórko, where 216.5 ha of afforested area was reclaimed after borehole exploitation, and Machów, where 871.7 ha of dump area was reclaimed after open cast strip mining. The current land use and land cover (LULC) classes at the Machów and Jeziórko former sulfur mines are derived based on Sentinel-2 image processing, and confirmed the applied type of reclamation for both analysed areas. The following LULC classes showed a significant spatial range: broad-leaved forest, coniferous forest, and transitional woodland shrub. The progress of afforested areas, not only in terms of the occupied area, but also in terms of the growth of trees and shrubs, was confirmed. The results of the study showed differences in vegetation parameters, namely, height and canopy cover. Various stages of vegetation growth were also observed. This indicates an ongoing process of vegetation development, as an effect of the reclamation treatment for these areas. View Full-Text
Keywords: airborne laser scanning; spatial structure of vegetation; land cover changes; image classification airborne laser scanning; spatial structure of vegetation; land cover changes; image classification
►▼ Show Figures 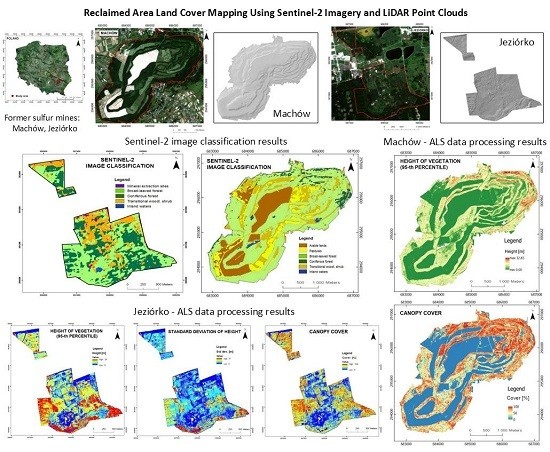