Sun-Induced chlorophyll Fluorescence (SIF) relates directly to photosynthesis yield and stress but there are still uncertainties in its interpretation. Most of these uncertainties concern the influences of the emitting vegetation’s structure (e.g., leaf angles, leaf clumping) and biochemistry (e.g., chlorophyll content, other pigments) on the radiative transfer of fluorescent photons. The Caatinga is a large region in northeast Brazil of semiarid climate and heterogeneous vegetation, where such biochemical and structural characteristics can vary greatly even within a single hectare. With this study we aimed to characterize eleven years of SIF seasonal variation from Caatinga vegetation (2007 to 2017) and to study its responses to a major drought in 2012. Orbital SIF data from the instrument GOME-2 was used along with MODIS MAIAC EVI and NDVI. Environmental data included precipitation rate (TRMM), surface temperature (MODIS) and soil moisture (ESA CCI). To support the interpretation of SIF responses we used red and far-red SIF adjusted by the Sun’s zenith angle (SIF-SZA) and by daily Photosynthetically Active Radiation (dSIF). Furthermore, we also adjusted SIF through two contrasting formulations using NDVI data as proxy for structure and biochemistry, based on previous leaf-level and landscape level studies: SIF-Yield and SIF-Prod. Data was tested with time-series decomposition, rank correlation, spatial correlation and Linear Mixed Models (LMM). Results show that GOME-2 SIF and adjusted SIF formulations responded consistently to the observed environmental variation and showed a marked decrease in SIF emissions in response to a 2012 drought that was generally larger than the corresponding NDVI and EVI decreases. Drought sensitivity of SIF, as inferred from LMM slopes, was correlated to land cover at different regions of the Caatinga. This is the first study to show correlation between landscape-level SIF and an emergent property of ecosystems (i.e., resilience), showcasing the value of remotely sensed fluorescence for ecological studies. View Full-Text
Keywords: chlorophyll fluorescence; SIF; drought; spectral vegetation indices; Caatinga; GOME-2; abiotic stress chlorophyll fluorescence; SIF; drought; spectral vegetation indices; Caatinga; GOME-2; abiotic stress
►▼ Show Figures 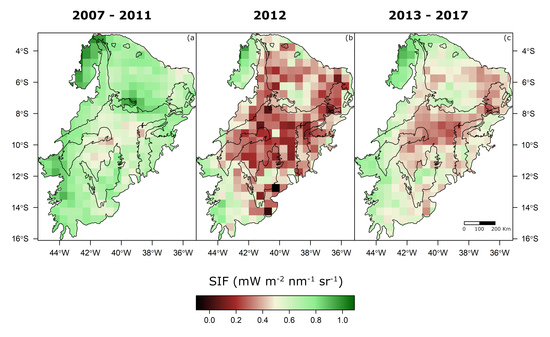