Quantitative Analysis of the Research Trends and Areas in Grassland Remote Sensing: A Scientometrics Analysis of Web of Science from 1980 to 2020
Previous Article in Journal

The analysis of multispectral imagery (MSI) acquired by unmanned aerial vehicles (UAVs) and mobile near-infrared reflectance spectroscopy (NIRS) used on-site has become increasingly promising for timely assessments of grassland to support farm management. However, a major challenge of these methods is their calibration, given the large spatiotemporal variability of grassland. This study evaluated the performance of two smart farming tools in determining fresh herbage mass and grass quality (dry matter, crude protein, and structural carbohydrates): an analysis model for MSI (GrassQ) and a portable on-site NIRS (HarvestLabTM 3000). We compared them to conventional look-up tables used by farmers. Surveys were undertaken on 18 multi-species grasslands located on six farms in Switzerland throughout the vegetation period in 2018. The sampled plots represented two phenological growth stages, corresponding to an age of two weeks and four to six weeks, respectively. We found that neither the performance of the smart farming tools nor the performance of the conventional approach were satisfactory for use on multi-species grasslands. The MSI-model performed poorly, with relative errors of 99.7% and 33.2% of the laboratory analyses for herbage mass and crude protein, respectively. The errors of the MSI-model were indicated to be mainly caused by grassland and environmental characteristics that differ from the relatively narrow Irish calibration dataset. The On-site NIRS showed comparable performance to the conventional Look-up Tables in determining crude protein and structural carbohydrates (error ≤ 22.2%). However, we identified that the On-site NIRS determined undried herbage quality with a systematic and correctable error. After corrections, its performance was better than the conventional approach, indicating a great potential of the On-site NIRS for decision support on grazing and harvest scheduling. View Full-Text
Keywords: evaluation; grassland assessment; mobile NIRS; multispectral imagery; UAV evaluation; grassland assessment; mobile NIRS; multispectral imagery; UAV
►▼ Show Figures 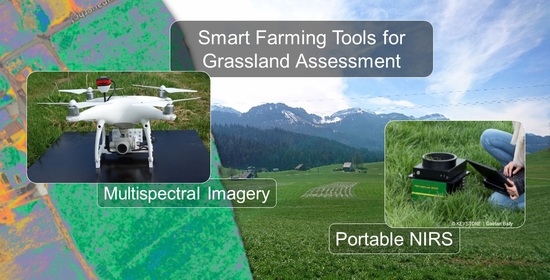