Sentinel-1 SAR Time Series-Based Assessment of the Impact of Severe Salinity Intrusion Events on Spatiotemporal Changes in Distribution of Rice Planting Areas in Coastal Provinces of the Mekong Delta, Vietnam
Next Article in Special Issue

Electric power services are fundamental to prosperity and economic development. Disruptions in the electricity power service can range from minutes to days. Such events are common in many developing economies, where the power generation and delivery infrastructure is often insufficient to meet demand and operational challenges. Yet, despite the large impacts, poor data availability has meant that relatively little is known about the spatial and temporal patterns of electric power reliability. Here, we explore the expressions of electric power instability recorded in temporal profiles of satellite observed surface lighting collected by the Visible Infrared Imaging Radiometer Suite (VIIRS) low light imaging day/night band (DNB). The nightly temporal profiles span from 2012 through to mid-2020 and contain more than 3000 observations, each from a total of 16 test sites from Africa, Asia, and North America. We present our findings in terms of various novel indicators. The preprocessing steps included radiometric adjustments designed to reduce variance due to the view angle and lunar illumination differences. The residual variance after the radiometric adjustments suggests the presence of a previously unidentified source of variability in the DNB observations of surface lighting. We believe that the short dwell time of the DNB pixel collections results in the vast under-sampling of the alternating current lighting flicker cycles. We tested 12 separate indices and looked for evidence of power instability. The key characteristic of lights in cities with developing electric power services is that they are quite dim, typically 5 to 10 times dimmer for the same population level as in Organization for Economic Co-operation and Development (OECD) countries. In fact, the radiances for developing cities are just slightly above the detection limit, in the range of 1 to 10 nanowatts. The clearest indicator for power loss is the percent outage. Indicators for supply adequacy include the radiance per person and the percent of population with detectable lights. The best indicator for load-shedding is annual cycling, which was found in more than half of the grid cells in two Northern India cities. Cities with frequent upward or downward radiance spikes can have anomalously high levels of variance, skew, and kurtosis. A final observation is that, barring war or catastrophic events, the year-on-year changes in lighting are quite small. Most cities are either largely stable over time, or are gradually increasing in indices such as the mean, variance, and lift, indicating a trajectory that proceeds across multiple years. View Full-Text
Keywords: VIIRS; day/night band; DNB; nighttime lights; electric power reliability; power outage; load-shedding; light pollution evolution VIIRS; day/night band; DNB; nighttime lights; electric power reliability; power outage; load-shedding; light pollution evolution
►▼ Show Figures 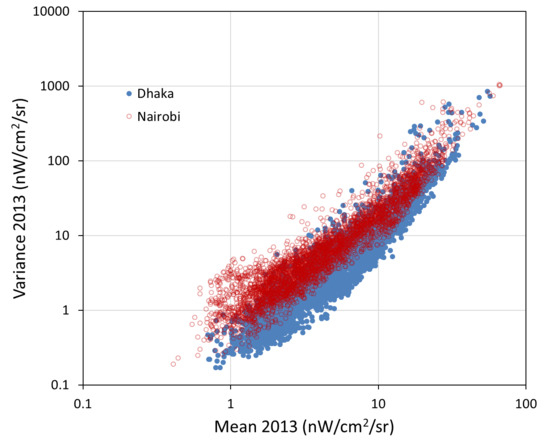