Fog affects transportation due to low visibility and also aggravates air pollutants. Thus, accurate detection and forecasting of fog are important for the safety of transportation. In this study, we developed a decision tree type fog detection algorithm (hereinafter GK2A_FDA) using the GK2A/AMI and auxiliary data. Because of the responses of the various channels depending on the time of day and the underlying surface characteristics, several versions of the algorithm were created to account for these differences according to the solar zenith angle (day/dawn/night) and location (land/sea/coast). Numerical model data were used to distinguish the fog from low clouds. To test the detection skill of GK2A_FDA, we selected 23 fog cases that occurred in South Korea and used them to determine the threshold values (12 cases) and validate GK2A_FDA (11 cases). Fog detection results were validated using the visibility data from 280 stations in South Korea. For quantitative validation, statistical indices, such as the probability of detection (POD), false alarm ratio (FAR), bias ratio (Bias), and equitable threat score (ETS), were used. The total average POD, FAR, Bias, and ETS for training cases (validation cases) were 0.80 (0.82), 0.37 (0.29), 1.28 (1.16), and 0.52 (0.59), respectively. In general, validation results showed that GK2A_FDA effectively detected the fog irrespective of time and geographic location, in terms of accuracy and stability. However, its detection skill and stability were slightly dependent on geographic location and time. In general, the detection skill and stability of GK2A_FDA were found to be better on land than on coast at all times, and at night than day at any location. View Full-Text
Keywords: fog; fog detection algorithm; GK2A/AMI; visibility fog; fog detection algorithm; GK2A/AMI; visibility
►▼ Show Figures 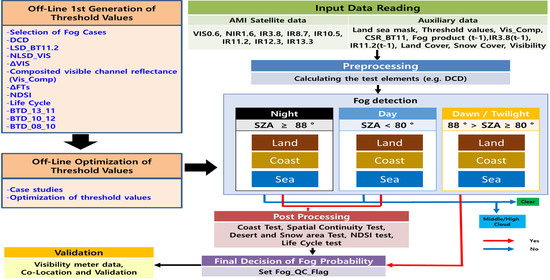