Implementation of a Nowcasting Hydrometeorological System for Studying Flash Flood Events: The Case of Mandra, Greece

Severe hydrometeorological hazards such as floods, droughts, and thunderstorms are expected to increase in the future due to climate change. Due to the significant impacts of these phenomena, it is essential to develop new and advanced early warning systems for advance preparation of the population and local authorities (civil protection, government agencies, etc.). Therefore, reliable forecasts of extreme events, with high spatial and temporal resolution and a very short time horizon are needed, due to the very fast development and localized nature of these events. In very short time-periods (up to 6 h), small-scale phenomena can be described accurately by adopting a “nowcasting” approach, providing reliable short-term forecasts and warnings. To this end, a novel nowcasting system was developed and presented in this study, combining a data assimilation system (LAPS), a large amount of observed data, including XPOL radar precipitation measurements, the Chemical Hydrological Atmospheric Ocean wave System (CHAOS), and the WRF-Hydro model. The system was evaluated on the catastrophic flash flood event that occurred in the sub-urban area of Mandra in Western Attica, Greece, on 15 November 2017. The event was one of the most catastrophic flash floods with human fatalities (24 people died) and extensive infrastructure damage. The update of the simulations with assimilated radar data improved the initial precipitation description and led to an improved simulation of the evolution of the phenomenon. Statistical evaluation and comparison with flood data from the FloodHub showed that the nowcasting system could have provided reliable early warning of the flood event 1, 2, and even to 3 h in advance, giving vital time to the local authorities to mobilize and even prevent fatalities and injuries to the local population. View Full-Text
Keywords: nowcasting; data assimilation; flash flood; weather radar; LAPS; CHAOS; WRF nowcasting; data assimilation; flash flood; weather radar; LAPS; CHAOS; WRF
►▼ Show Figures 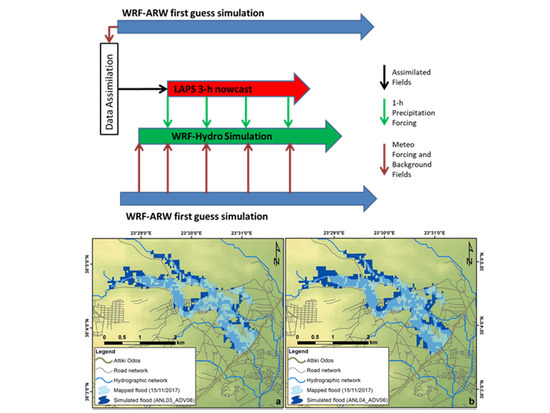