Analysis of synthetic aperture radar (SAR) images in L-band of short-period internal waves (IWs), and classification of their radar signatures is presented by means of a polarimetric data set from ALOS-PALSAR mission. We choose the polarimetric feature named standard deviation(std) of the co-polarized phase difference (CPD) to identify fundamental differences in SAR signatures of internal waves, and divided them into three different classes, according to their backscattered modulation depths and morphology as well as the std CPD, namely: double-signed, single-negative, and single-positive signatures, for IW normalized image transects that display, respectively, signatures in the form of bright/dark, dark, and bright bands that correspond to positive/negative, negative, or positive variations of radar backscatter. These radar power types of signatures have a counterpart in the std CPD normalized transects, and in this paper we discuss those correlations and decorrelations. We focus in the single-negative type of signature, that is dark bands on gray background, and show that the std CPD is greatly enhanced over the troughs and rear slopes of those IWs. It is suggested that such behavior is consistent with the presence of surface slicks owing to enhanced surfactant concentration. Furthermore, those single-negative SAR signatures appear at locations where and when biological productivity is enhanced. It is found that the modulation depths associated to the std CPD is higher than the one associated to the HH-polarized radar backscatter for single-negative signatures propagating in the range direction, while the reverse occurs for the other types of signatures. View Full-Text
Keywords: surfactant films; internal waves; synthetic aperture radar (SAR); polarimetry; co-polarized phase difference surfactant films; internal waves; synthetic aperture radar (SAR); polarimetry; co-polarized phase difference
►▼ Show Figures 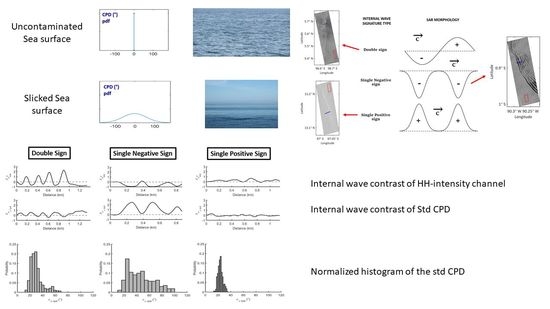