Multi-Decadal Changes in Mangrove Extent, Age and Species in the Red River Estuaries of Viet Nam

This research investigated the performance of four different machine learning supervised image classifiers: artificial neural network (ANN), decision tree (DT), random forest (RF), and support vector machine (SVM) using SPOT-7 and Sentinel-1 images to classify mangrove age and species in 2019 in a Red River estuary, typical of others found in northern Viet Nam. The four classifiers were chosen because they are considered to have high accuracy, however, their use in mangrove age and species classifications has thus far been limited. A time-series of Landsat images from 1975 to 2019 was used to map mangrove extent changes using the unsupervised classification method of iterative self-organizing data analysis technique (ISODATA) and a comparison with accuracy of K-means classification, which found that mangrove extent has increased, despite a fall in the 1980s, indicating the success of mangrove plantation and forest protection efforts by local people in the study area. To evaluate the supervised image classifiers, 183 in situ training plots were assessed, 70% of them were used to train the supervised algorithms, with 30% of them employed to validate the results. In order to improve mangrove species separations, Gram–Schmidt and principal component analysis image fusion techniques were applied to generate better quality images. All supervised and unsupervised (2019) results of mangrove age, species, and extent were mapped and accuracy was evaluated. Confusion matrices were calculated showing that the classified layers agreed with the ground-truth data where most producer and user accuracies were greater than 80%. The overall accuracy and Kappa coefficients (around 0.9) indicated that the image classifications were very good. The test showed that SVM was the most accurate, followed by DT, ANN, and RF in this case study. The changes in mangrove extent identified in this study and the methods tested for using remotely sensed data will be valuable to monitoring and evaluation assessments of mangrove plantation projects. View Full-Text
Keywords: mangrove development; mangrove plantation; machine learning; mangrove condition; classification; remote sensing mangrove development; mangrove plantation; machine learning; mangrove condition; classification; remote sensing
►▼ Show Figures 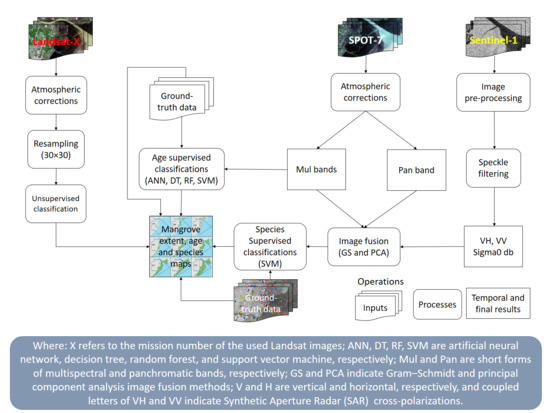