Retrieval of Soil Moisture Content Based on a Modified Hapke Photometric Model: A Novel Method Applied to Laboratory Hyperspectral and Sentinel-2 MSI Data
Next Article in Special Issue

The forest growth and yield models, which are used as important decision-support tools in forest management, are commonly based on the individual tree characteristics, such as diameter at breast height (DBH), crown ratio, and height to crown base (HCB). Taking direct measurements for DBH and HCB through the ground-based methods is cumbersome and costly. The indirect method of getting such information is possible from remote sensing databases, which can be used to build DBH and HCB prediction models. The DBH and HCB of the same trees are significantly correlated, and so their inherent correlations need to be appropriately accounted for in the DBH and HCB models. However, all the existing DBH and HCB models, including models based on light detection and ranging (LiDAR) have ignored such correlations and thus failed to account for the compatibility of DBH and HCB estimates, in addition to disregarding measurement errors. To address these problems, we developed a compatible simultaneous equation system of DBH and HCB error-in-variable (EIV) models using LiDAR-derived data and ground-measurements for 510 Picea crassifolia Kom trees in northwest China. Four versatile algorithms, such as nonlinear seemingly unrelated regression (NSUR), two-stage least square (2SLS) regression, three-stage least square (3SLS) regression, and full information maximum likelihood (FIML) were evaluated for their estimating efficiencies and precisions for a simultaneous equation system of DBH and HCB EIV models. In addition, two other model structures, namely, nonlinear least squares with HCB estimation not based on the DBH (NLS and NBD) and nonlinear least squares with HCB estimation based on the DBH (NLS and BD) were also developed, and their fitting precisions with a simultaneous equation system compared. The leave-one-out cross-validation method was applied to evaluate all estimating algorithms and their resulting models. We found that only the simultaneous equation system could illustrate the effect of errors associated with the regressors on the response variables (DBH and HCB) and guaranteed the compatibility between the DBH and HCB models at an individual level. In addition, such an established system also effectively accounted for the inherent correlations between DBH with HCB. However, both the NLS and BD model and the NLS and NBD model did not show these properties. The precision of a simultaneous equation system developed using NSUR appeared the best among all the evaluated algorithms. Our equation system does not require the stand-level information as input, but it does require the information of tree height, crown width, and crown projection area, all of which can be readily derived from LiDAR imagery using the delineation algorithms and ground-based DBH measurements. Our results indicate that NSUR is a more reliable and quicker algorithm for developing DBH and HCB models using large scale LiDAR-based datasets. The novelty of this study is that the compatibility problem of the DBH model and the HCB EIV model was properly addressed, and the potential algorithms were compared to choose the most suitable one (NSUR). The presented method and algorithm will be useful for establishing similar compatible equation systems of tree DBH and HCB EIV models for other tree species. View Full-Text
Keywords: Picea crassifolia Kom; compatible equation; nonlinear seemingly unrelated regression; error-in-variable modeling; leave-one-out cross-validation Picea crassifolia Kom; compatible equation; nonlinear seemingly unrelated regression; error-in-variable modeling; leave-one-out cross-validation
►▼ Show Figures 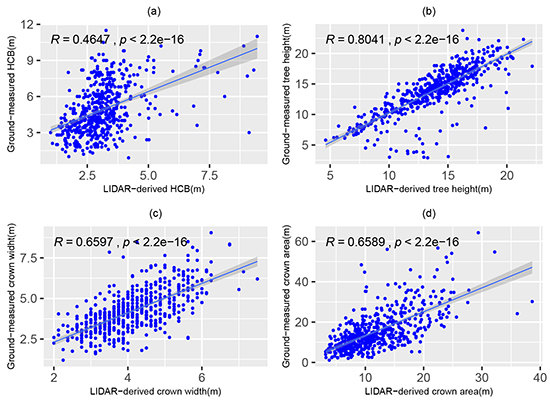