The Taurus-Littrow valley on the Moon was the location of intensive geologic fieldwork during three days in December 1972. In situ activities at sampling stations were systematically documented by the astronauts using a series of overlapping images taken with their Hasselblad cameras. We investigated how this Apollo image archive can be used to perform 3-D reconstructions of several boulders of interest using close-range photogrammetry. We specifically focused on seven different boulders located at Stations 2, 6, and 7, at the foot of South and North Massifs, respectively. These boulders represent samples from highland materials, which rolled down the slopes of the surrounding hills. We used the Agisoft Metashape software to compute 3-D reconstructions of these boulders, using 173 scanned images as input. We then used either a web-based platform or a game engine to render the models in virtual reality. This allowed the users to walk around the boulders and to investigate in detail their morphology, fractures, vesicles, color variations, and sampling spots, as if standing directly in front of them with the astronauts. This work suggests that many features can be reconstructed in other sites of the Apollo missions, so as other robotic landing sites. Virtual reality techniques coupled to photogrammetry is thus opening a new era of exploration, both for past and future landing sites. View Full-Text
Keywords: sample documentation; remote sensing; photogrammetry; moon; 3-D; Apollo; geology; virtual reality sample documentation; remote sensing; photogrammetry; moon; 3-D; Apollo; geology; virtual reality
►▼ Show Figures 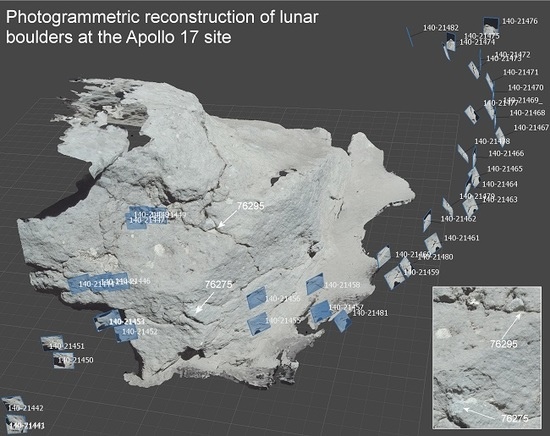