Refined empirical algorithms for chlorophyll-a (Chl-a) concentration, using the maximum ratio of normalized water-leaving radiance nLw(λ) at the blue and green bands, and Secchi depth (SD) from nLw(λ) at 551 nm, nLw(551), are proposed for the Visible Infrared Imaging Radiometer Suite (VIIRS) onboard the Suomi National Polar-orbiting Partnership (SNPP) satellite in the Great Lakes. We demonstrated that water quality properties and phytoplankton production can be successfully monitored and assessed using the new regional Chl-a and SD algorithms, with reasonably accurate estimates of Chl-a and SD from the VIIRS-SNPP ocean color data in the Great Lakes. VIIRS-derived Chl-a and SD products using the proposed algorithms provide the temporal and spatial variabilities in the Great Lakes. Overall, Chl-a concentrations are generally low in lakes Michigan and Huron, while Chl-a data are highest in Lake Erie. The seasonal pattern shows that overall low Chl-a concentrations appear in winter and high values in June to September in the lakes. The distribution of SD in the Great Lakes is spatially and temporally different from that of Chl-a. The SD data are generally lower in summer and higher in winter in most of the Great Lakes. However, the highest SD in Lake Erie appears in summer, and lower values in winter. Significantly high values in Chl-a, and lower values in SD, in the nearshore regions, such as Thunder Bay, Saginaw Bay, and Whitefish Bay, can be related to the very shallow bathymetry and freshwater inputs from the land. The time series of VIIRS-derived Chl-a and SD data provide strong interannual variability in most of the Great Lakes. View Full-Text
Keywords: Great Lakes; remote sensing; ocean color; chlorophyll-a; Secchi depth; water quality; Visible Infrared Imaging Radiometer (VIIRS) Great Lakes; remote sensing; ocean color; chlorophyll-a; Secchi depth; water quality; Visible Infrared Imaging Radiometer (VIIRS)
►▼ Show Figures 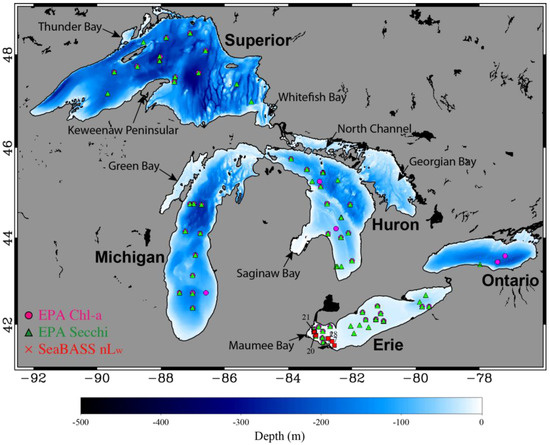