On the Interest of Optical Remote Sensing for Seasonal Snowmelt Parameterization, Applied to the Everest Region (Nepal)

Snowoff (SO) date—defined as the last day of observed seasonal snow cover—is an important governor of ecologic and hydrologic processes across Alaska and Arctic-Boreal landscapes; however, our understanding and capacity for the monitoring of spatial and temporal variability in the SO date is still lacking. In this study, we present a 6.25 km spatially gridded passive microwave (PMW) SO data record, complimenting current Alaskan SO records from Moderate Resolution Imaging Spectrometer (MODIS) and Landsat, but extending the SO record an additional 13 years. The PMW SO record was validated against in situ snow depth observations and showed favorable accuracy (0.66–0.92 mean correlations; 2–10 day mean absolute errors) for the major climate regions of Alaska. The PMW SO results were also within 10 days of finer spatial scale SO observational records, including Interactive Multisensor Snow and Ice Mapping System (IMS), MODIS, and Landsat, for a majority (75%) of Alaska. However, the PMW record showed a general SO delay at higher elevations and across the Alaska North Slope, and earlier SO in the Alaska interior and southwest regions relative to the other SO records. Overall, we assign an uncertainty +/−11 days to the PMW SO. The PMW SO record benefits from the near-daily temporal fidelity of underlying brightness temperature (Tb) observations and reveals a mean regional trend in earlier SO timing (−0.39 days yr−1), while significant (p < 0.1) SO trend areas encompassed 11% of the Alaska domain and ranged from −0.11 days yr−1 to −1.31 days yr−1 over the 29-year satellite record. The observed SO dates also showed anomalous early SO dates during markedly warm years. Our results clarify the pattern and rate of SO changes across Alaska, which are interactive with global warming and contributing to widespread permafrost degradation, changes in regional hydrology, ecosystems, and associated services. Our results also provide a robust means for SO monitoring from satellite PMW observations with similar precision as more traditional and finer scale observations. View Full-Text
Keywords: snow cover; snowoff; snow melt; passive microwave; Alaska; Arctic snow cover; snowoff; snow melt; passive microwave; Alaska; Arctic
►▼ Show Figures 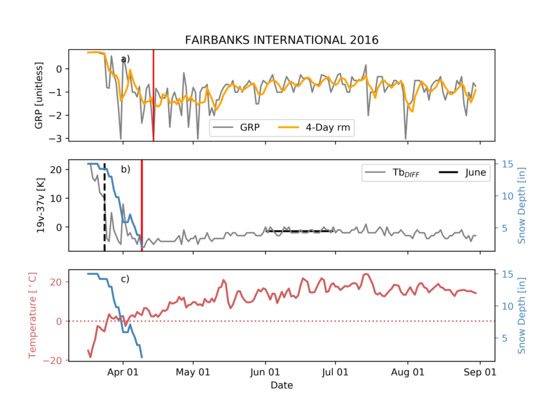