The Horn of Africa ((HOA), including Djibouti, Eritrea, Ethiopia, and Somalia) has been slammed by extreme drought within the past years, and has become one of the most food-insecure regions in the world. Millions of people in the HOA are undernourished and are at risk of famine. Meanwhile, global climate change continues to cause more extreme weather and climate events, such as drought and heat waves, which have significant impacts on crop production and food security. This study aimed to investigate extreme drought in the Horn of Africa region, using satellite remote sensing data products from the Moderate Resolution Imaging Spectroradiometer (MODIS), a key instrument onboard the National Aeronautics and Space Administration (NASA) satellites Terra and Aqua, as well as Tropical Rainfall Measuring Mission (TRMM) precipitation data products. Normalized Difference Vegetation Index (NDVI), Vegetation Condition Index (VCI), Temperature Condition Index (TCI), and Vegetation Health Index (VHI) data from 2000 to 2017 were derived from the MODIS measurements and analyzed for assessments of the temporal trend of vegetation health and the impacts of extreme drought events. The results demonstrated the severity of vegetation stress and extreme drought during the past decades. From 1998 to 2017, monthly precipitation over major crop growth seasons decreased significantly. From 2001 to 2017, the mean VHI anomaly of HOA cropland decreased significantly, at a trend of −0.2364 ± 0.1446/year, and the mean TCI anomaly decreased at a trend of −0.2315 ± 0.2009/year. This indicated a deterioration of cropland due to drought conditions in the HOA. During most of the crop growth seasons in 2015 and 2016, the VHI values were below the 10-year (2001–2010) average: This was caused by extreme drought during the 2015–2016 El Niño event, one of the strongest El Niño events in recorded history. In addition, monthly VHI anomalies demonstrated a high correlation with monthly rainfall anomalies in July and August (the growth season of major crops in the HOA), and the trough points of the monthly rainfall and VHI anomaly time series of July and August were consistent with the timing of drought events and El Niño events. View Full-Text
Keywords: agricultural drought; remote sensing; MODIS data products; TRMM data products; precipitation; vegetation indices; Horn of Africa agricultural drought; remote sensing; MODIS data products; TRMM data products; precipitation; vegetation indices; Horn of Africa
►▼ Show Figures 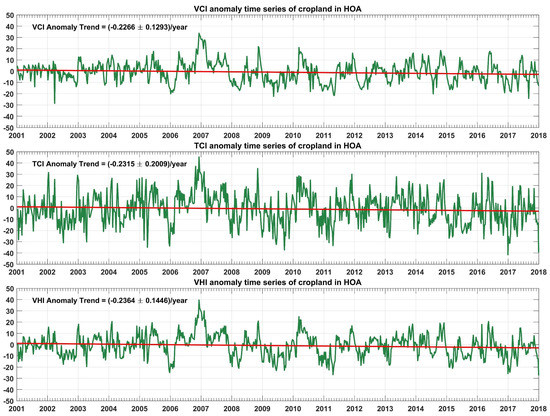