Multi-Source Data Fusion Based on Ensemble Learning for Rapid Building Damage Mapping during the 2018 Sulawesi Earthquake and Tsunami in Palu, Indonesia
Next Article in Special Issue

Population growth, economic development and rural-urban migration have caused rapid expansion of urban areas and metropolitan regions in Turkey. The structure of urban administration and planning has faced different socio-economic and political challenges, which have hindered the structured and planned development of cities and regions, resulting in an irregular and uneven development of these regions. We conducted detailed comparative analysis on spatio-temporal changes of the identified seven land-use/cover classes across different regions in Turkey with the use of Corine Land Cover (CLC) data of circa 1990, 2000, 2006 and 2012, integrated with Geographic Information System (GIS) techniques. Here we compared spatio-temporal changes of urban and non-urban land uses, which differ across regions and across different hierarchical levels of urban areas. Our findings have shown that peri-urban areas are growing more than rural areas, and even growing more than urban areas in some regions. A deeper look at regions located in different geographical zones pointed to substantial development disparities across western and eastern regions of Turkey. We also employed multiple regression models to explain any possible drivers of land-use change, regarding both urban and non-urban land uses. The results reveal that the three influencing factors-socio-economic characteristics, regional characteristics and location, and development constraints, facilitate land-use change. However, their impacts differ in different geographical locations, as well as with different hierarchical levels. View Full-Text
Keywords: land-use/land-cover change; urban; peri-urban; rural; regression analysis; regional development; Turkey land-use/land-cover change; urban; peri-urban; rural; regression analysis; regional development; Turkey
►▼ Show Figures 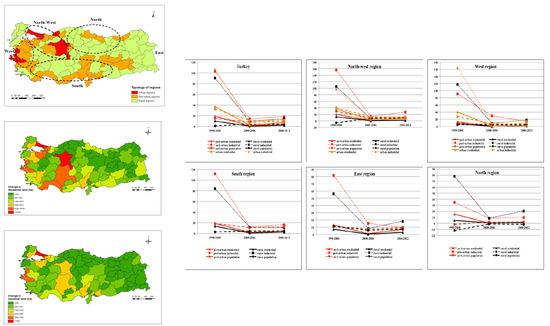