In this study, three months of records (January–March 2010) that were acquired by a geodetic Global Navigation Satellite Systems (GNSS) station from the permanent network of RGP (Réseau GNSS Permanent), which was deployed by the French Geographic Institute (IGNF), located in Socoa, in the south of the Bay of Biscay, were used to determine the tide components and identify the signature of storms on the signal to noise ratio (SNR) during winter 2010. The Xynthia storm hit the French Atlantic coast on the 28th of February 2010, causing large floods and damages from the Gironde to the Loire estuaries. Blind separation of the tide components and of the storm signature was achieved while using both a singular spectrum analysis (SSA) and a continuous wavelet transform (CWT). A correlation of 0.98/0.97 and root mean square error (RMSE) of 0.21/0.28 m between the tide gauge records of Socoa and our estimates of the sea surface height (SSH) using the SSA and the CWT, respectively, were found. Correlations of 0.76 and 0.7 were also obtained between one of the modes from the SSA and atmospheric pressure from a meteorological station and a mode of the SSA. Particularly, a correlation reaches to 0.76 when using both the tide residual that is associated to surges and atmospheric pressure variation. View Full-Text
Keywords: GNSS; Singular Spectrum Analysis; Continuous Wavelet Transform; tide gauge; inverted barometer; surge storm GNSS; Singular Spectrum Analysis; Continuous Wavelet Transform; tide gauge; inverted barometer; surge storm
►▼ Show Figures 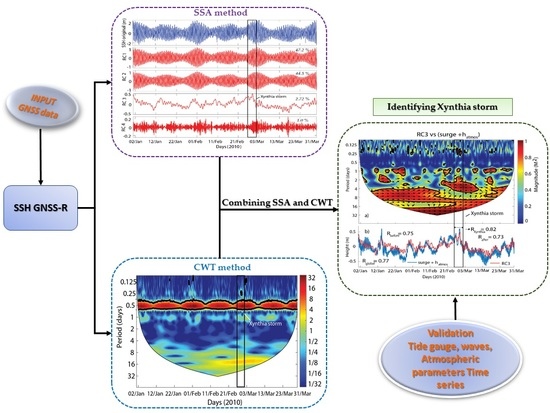