The Visible Infrared Imaging Radiometer Suite (VIIRS) collects low light imaging data at night in five spectral bands. The best known of these is the day/night band (DNB) which uses light intensification for imaging of moonlit clouds in the visible and near-infrared (VNIR). The other four low light imaging bands are in the NIR and short-wave infrared (SWIR), designed for daytime imaging, which continue to collect data at night. VIIRS nightfire (VNF) tests each nighttime pixel for the presence of sub-pixel IR emitters across six spectral bands with two bands each in three spectral ranges: NIR, SWIR, and MWIR. In pixels with detection in two or more bands, Planck curve fitting leads to the calculation of temperature, source area, and radiant heat using physical laws. An analysis of January 2018 global VNF found that inclusion of the NIR and SWIR channels results in a doubling of the VNF pixels with temperature fits over the detection numbers involving the MWIR. The addition of the short wavelength channels extends detection limits to smaller source areas across a broad range of temperatures. The VIIRS DNB has even lower detection limits for combustion sources, reaching 0.001 m2 at 1800 K, a typical temperature for a natural gas flare. Comparison of VNF tallies and DNB fire detections in a 2015 study area in India found the DNB had 15 times more detections than VNF. The primary VNF error sources are false detections from high energy particle detections (HEPD) in space and radiance saturation on some of the most intense events. The HEPD false detections are largely eliminated in the VNF output by requiring multiband detections for the calculation of temperature and source size. Radiance saturation occurs in about 1% of the VNF detections and occurs primarily in the M12 spectral band. Inclusion of the radiances affected by saturation results in temperature and source area calculation errors. Saturation is addressed by identifying the presence of saturation and excluding those radiances from the Planck curve fitting. The extremely low detection limits for the DNB indicates that a DNB fire detection algorithm could reveal vast numbers of combustion sources that are undetectable in longer wavelength VIIRS data. The caveats with the DNB combustion source detection capability is that it should be restricted to pixels that are outside the zone of known VIIRS detected electric lighting. View Full-Text
Keywords: satellite fire detection; VIIRS; DNB; SWIR; low light imaging; biomass burning; gas flares satellite fire detection; VIIRS; DNB; SWIR; low light imaging; biomass burning; gas flares
►▼ Show Figures 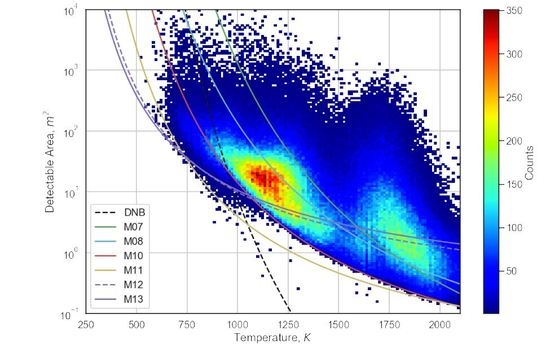