Characteristics of Warm Clouds and Precipitation in South China during the Pre-Flood Season Using Datasets from a Cloud Radar, a Ceilometer, and a Disdrometer
Next Article in Special Issue

Coastal Mangrove Response to Marine Erosion: Evaluating the Impacts of Spatial Distribution and Vegetation Growth in Bangkok Bay from 1987 to 2017
Previous Article in Journal

The Impact of Artificial Wetland Expansion on Local Temperature in the Growing Season—the Case Study of the Sanjiang Plain, China

Changes in Lake Area in Response to Climatic Forcing in the Endorheic Hongjian Lake Basin, China

Endorheic lakes are key components of the water cycle and the ecological system in endorheic basins. The endorheic Hongjian Lake wetland is China’s national nature reserve for protecting the vulnerable species of Relict Gull. The Hongjian Lake, once China’s largest desert freshwater lake, has been suffering from severe shrinkage in the last two decades, yet the variations in the lake area and its responses to climate change are poorly understood due to a lack of in situ observations. In this study, using Landsat remote sensing images, the Modified Normalized Difference Water Index, and nonparametric tests, we obtained the Hongjian Lake area changes on the annual, seasonal, and quasi-monthly scales during 1988–2014, analyzed the corresponding variations of the six climatic factors in the Hongjian Lake Basin (HJLB) using satellite-based products, and investigated the multi-scale response characteristics of lake area to climatic forcing using correlation analysis. The results showed that the lake area decreased during 1988–2014, and this process can be divided into two sub-stages, namely the first slight increasing sub-phase in 1988–1999 and the second significant declining sub-phase in 2000–2014. The shifts in patterns of the seasonal cycle had three types: as the natural rhythm of the lake changes has been broken by intensive human activities since the late 1990s, the natural bimodal type I has obviously changed into non-natural bimodal type II and unimodal type III, featured by a declining peak in July–September. The climatic wet/dry regime on multi-scales during 1988–2014 in the HJLB was generally warming and drying, mainly reflected by the increase in temperature (T), arid index (AI) and evaporation (ET0, ETa), and the decrease in the precipitation (Pre) and actual water difference (AWD). There were large differences in the climatic factors at different time scales, especially in the wet and dry seasons. When the lagged effect, the cumulative effect, and the lagged and cumulative combined effect were gradually considered, the correlation coefficient significantly increased, and the direction of the correlation coefficient became coincident with common sense. The correlation analysis identified a lag period of approximately 1–3 years on an annual scale, and a lag period of approximately 1–3 months on a monthly scale. This study could provide a certain scientific reference for climate change detection, water resource management, and species habitat protection in the HJLB and similar endorheic basins or inland arid regions. View Full-Text
Keywords: inland lake wetland; nature preserve; lake area; climate change; Relict Gull (Larus relictus); Yellow River Basin; Landsat; Modified Normalized Difference Water Index (MNDWI) inland lake wetland; nature preserve; lake area; climate change; Relict Gull (Larus relictus); Yellow River Basin; Landsat; Modified Normalized Difference Water Index (MNDWI)
►▼ Show Figures 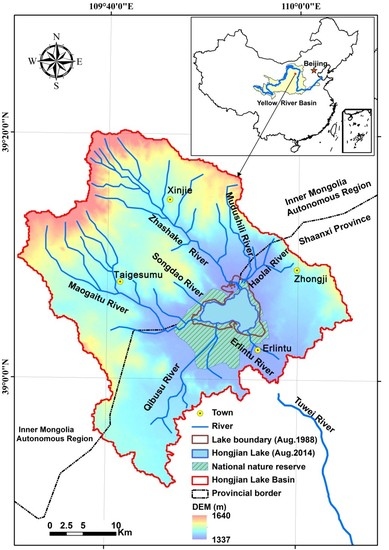