Named storms can cause substantial impacts on the habitat and reproductive output of threatened species, such as marine turtles. To determine the impacts of named storms on marine turtles and inform management, it is necessary to determine the exposure of marine turtle nesting grounds to recent storm activities. To address this, remote sensing information of named storm tracks coupled with nesting ground data were used to investigate the temporal and spatial overlap between nesting grounds for four species of marine turtles in the continental United States of America. All species of marine turtles were exposed to named storms, with variation in exposure driven by the spatial distribution of each population’s nesting ground, the temporal overlap between the storms and reproductive events, and nest placement on the beach. Loggerhead turtles were the most exposed species to named storms, with the northern management unit having significantly higher exposure levels than all other loggerhead management units. Kemp’s ridley turtles, in contrast, were found to be the least exposed species to named storms. This study establishes a valuable current baseline against which to measure and compare future impacts that result as climate change progresses and storms become more frequent and intense. Importantly, cumulative and synergetic effects from other climatic processes and anthropogenic stressors should be considered in future analysis. View Full-Text
Keywords: hurricane; sea turtle; inundation; climate change hurricane; sea turtle; inundation; climate change
►▼ Show Figures 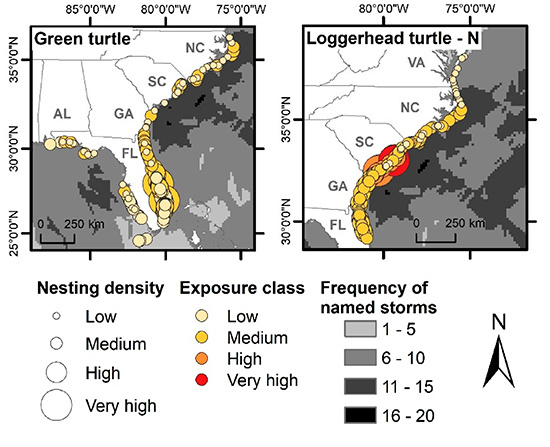