Geodetic Model of the 2017 Mw 6.5 Mainling Earthquake Inferred from GPS and InSAR Data

The monitoring of particulate organic carbon (POC) flux at the bottom of the euphotic layer in global ocean using remote sensing satellite data plays an important role in clarifying and evaluating the ocean carbon cycle. Based on the in situ POC flux data, this paper evaluated various estimation models. The global ocean POC flux from 2003 to 2018 was calculated using the optimal model, and its temporal and spatial variation characteristics were analyzed. In general, the annual average of global ocean POC flux is about 8.5–14.3 for period of 2003–2018. In the spatial dimension, the POC flux in the mid-latitude ocean (30–60°) is higher than that in the low-latitude (0–30°). The POC flux in Continental Margins with water depth less than 2000 m accounted for 30% of global ocean, which should receive more attention in global carbon cycle research. In the time dimension, the global POC flux decreases year by year generally, but the POC flux abnormally decreases during El Niño and increases during La Niña. In addition, due to global warming, sea ice melting, and bipolar sea area expansion, POC flux in high-latitude oceans (60–90°) is increasing year by year. View Full-Text
Keywords: ocean carbon cycle; remote sensing; particulate organic carbon (POC) flux; El Niño ocean carbon cycle; remote sensing; particulate organic carbon (POC) flux; El Niño
►▼ Show Figures 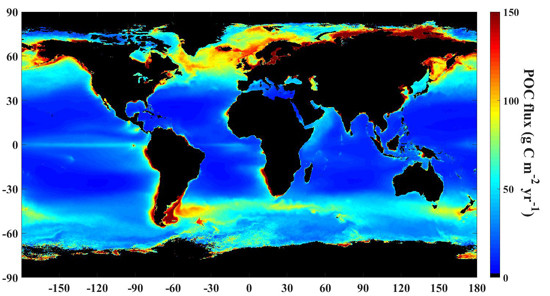