Mangrove forests play a global role in providing ecosystem goods and services in addition to acting as carbon sinks, and are particularly vulnerable to climate change effects such as rising sea levels and increased salinity. For this reason, accurate long-term monitoring of mangrove ecosystems is vital. However, these ecosystems are extremely dynamic and data frequency is often reduced by cloud cover. The Continuous Change Detection and Classification (CCDC) method has the potential to overcome this by utilising every available observation on a per-pixel basis to build stable season-trend models of the underlying phenology. These models can then be used for land cover classification and to determine greening and browning trends. To demonstrate the utility of this approach, CCDC was applied to a 30-year time series of Landsat data covering an area of mangrove forest known as the Sundarbans. Spanning the delta formed by the confluence of the Ganges, Brahmaputra and Meghna river systems, the Sundarbans is the largest contiguous mangrove forest in the world. CCDC achieved an overall classification accuracy of 94.5% with a 99% confidence of being between 94.2% and 94.8%. Results showed that while mangrove extent in the Sundarbans has remained stable, around 25% of the area experienced an overall negative trend, probably due to the effect of die-back on Heritiera fomes. In addition, dates and magnitudes of change derived from CCDC were used to investigate damage and recovery from a major cyclone; 11% of the Sundarbans was found to have been affected by Cyclone Sidr in 2007, 47.6% of which had not recovered by mid-2018. The results indicate that while the Sundarbans forest is resilient to cyclone events, the long-term degrading effects of climate change could reduce this resilience to critical levels. The proposed methodology, while computationally expensive, also offers means by which the full Landsat archive can be analyzed and interpreted and should be considered for global application to mangrove monitoring. View Full-Text
Keywords: Landsat; mangroves; CCDC; Open Data Cube; change detection; sundarbans Landsat; mangroves; CCDC; Open Data Cube; change detection; sundarbans
►▼ Show Figures 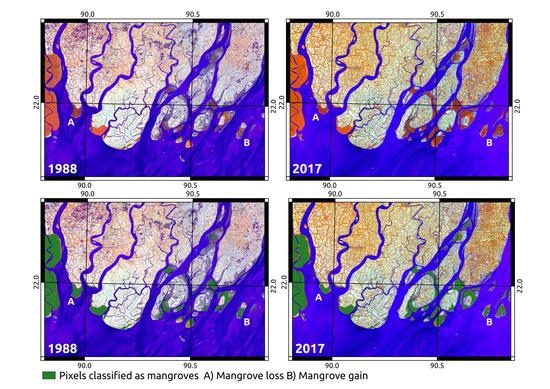