:
The lack of availability of historical and reliable river water level information is an issue that can be overcome through the exploitation of modern satellite remote sensing systems. This research has the objective of contributing in solving the information-gap problem of river flow monitoring through a synthetic aperture radar (SAR) signal processing technique that has the capability to perform water flow elevation estimation. This paper proposes the application of a new method for the design of a robust procedure to track over the time double-bounce reflections from bridges crossing rivers to measure the gap space existing between the river surface and bridges. Specifically, the difference in position between the single and double bounce is suitably measured over the time. Simulated and satellite temporal series of SAR data from COSMO-SkyMed data are compared to the ground measurements recorded for three gauges sites over the Po and Tiber Rivers, Italy. The obtained performance indices confirm the effectiveness of the method in the estimation of water level also in narrow or ungauged rivers.
Keywords:
synthetic aperture radar (SAR); rivers water-flow elevation estimation; pixel-tracking; phase unwrapping

In this section, the proposed methodology for the retrieval of rivers water flow elevation is described in depth. We will discuss the geometry of observation in Section 2.1 and the workflow of the algorithm in Section 2.2.

The geometry of the proposed electromagnetic measurement system is depicted in Figure 1. Precisely, Figure 1a shows the scheme of an existing river on the SAR representation plane, in the range-azimuth reference system. The water of the river is represented flowing along the range direction and from left to right (this is represented by the red arrow visible on the right side of the figure). A bridge is present in the middle of the figure and crossing the azimuth dimension. Figure 1b represents what is shown in Figure 1a but in the height-range coordinates. It is clear that the Ref point, which is the focused single-bounce backscattered echo, is constituted by the front-edge of the bridge that is visible on the Single Look Complex (SLC) image. Its position is constant during the entire time series. The positions of points P1, P2 and P3 on the SLC projection screen, represents the double-bounce backscattered echoes of the same target. The distance of the two-way propagation system depends on the heights of the water levels L1, L2 and L3, which are variable with respect to the time.

The simulated data are generated in order to emulate as closely as possible the most suitable observation and geometry characteristics. The bridge is designed with a longitudinal axis perfectly perpendicular to the range direction, a bridge width of about 30 pixels and a maximum variation of double-bounce scattering of about 1.5 pixels. The radar is designed with the same features as the COSMO-SkyMed sensor.
In this specific case, simulated data consist of a sub-ROI reflectivity range profile for which the energy is shown in Figure 4a. From inspection of the figure, it is possible to notice the beginning and the end of the bridge edges. These scattering events, denoted by the numbers 1 and 2, are generated by the direct reflection events and they are directly projected onto the slant-range line. The energy peak generated by the double-bounce scattering mechanism is the one indicated by the number 3 and, thanks to the layover effect, is located behind the main scatterers. The position in time of peaks 1 and 2 remain stable over time because the bridge does not move while peak 3 changes its position due to the variation of the height level of the river’s water surface. According to the DFT property (6), a time-variation position of the peak number 3 is corresponding to a frequency variation of its DFT. The variation of the phasor oscillation frequency will increase its absolute phase value (unwrapped phase) [21]. This distance, appropriately scaled and then calibrated at the first observation performed by the ground station (terrain gauge), is being used as an indication of the river’s height. The input signal is represented by the sinusoidal sub-pixel variation indicated by arrow number 3. In Figure 4b), the unwrapped phases related to each interferometric pair are reported (the lines with different colors are corresponding to the different observations). The reconstructed level variation is depicted in Figure 4c. From Figure 4b we see that the output response of the function is linear so the parameter of Equation (5) represents the angular coefficient of the linear phases. The ripple in Figure 4c is present due to an oversampling factor of 10 has been used. The higher the oversampling factor, the less visible this noise will be. In the experimental data using the satellite sensor, a very high oversampling factor of 64 will be chosen.

The performance of the procedure has been evaluated processing a long temporal series of CSK data using three different case studies which are described in detail in Section 4.1. The results estimated from satellite data are validated by comparison with the in-situ observations in Section 4.2.

This section provides comments on the experimental results observed in the three case studies. The experimental results show that the implemented algorithm is quite robust, although sometimes it fails to provide a reliable estimate. This is because there is a temporal misalignment from the actual SAR observation that occurs in Italy either early in the morning or late in the evening compared to the measurement of the instrument located in the immediate vicinity of the bridges. This time misalignment is also found to be many hours.
In Figure 16, the scatterplot is reported for each case study, representing the comparison between the water levels estimated by satellite and those observed by the in-situ station. For the Po and the Tiber in Rome (Figure 16 left and right) the water levels overlap the bisector line, as also indicated by the linear regression (red line). In the case of Tiber at Ponte Nuovo (Figure 16 center) the simulated water levels underestimate the ground-based observations up to 2 m, whereas they overestimate the higher water levels. Therefore, the red line does not lie upon the bisector line as the other two cases.
The worst performance are obtained for the Ponte Nuovo case study (as shown at the center of Figure 16). It is worth noticing that this case study has to be selected to provide an example of a difficult scene to analyze. This difficulty can be attributed to the width of the river that in this region is quite narrow (60 m as shown in Table 1) and is greatly contaminated by the surrounding vegetation. These characteristics can affect the satellite measurements and represent a good testbed for the proposed algorithm which, despite everything, would provide still reliable results as shown in the figure. A possible solution to improve the performance of the algorithm could be the installation of corner reflectors in the scene to mitigate the effect of the noise introduced in the radar measurements.
In order to quantify the performances of the analysis, four indicators are calculated:
Table 3 shows the performances for the three case studies comparing the water levels estimated by the procedure and those observed by in-situ stations. As deduced by the scatterplots, best results are obtained for case study one and three, with coefficient of correlation greater than 0.88 and NS greater than 0.77.
Lower performances are obtained for case two with NS smaller than zero and RRMSE of 39%. However, if we calculate the performance considering the linear regression as shown in Figure 16 (center), the performances improve (NS = 0.43; RMSE = 0.51; RRMSE = 0.29). This means that the procedure can fail in terms of absolute values but can be a support to evaluate a variability of the water level if no other measurements are available, as for example in ungauged basins.
In the first case study, the value of the RMSE is quite high (0.91 m) comparing to the other two cases but the RRMSE is the lowest. This is due to the fact that the RMSE is an absolute figure of merit that is not related to a specific value as, on the contrary, the RRMSE. In fact, for the case 1, the water levels range from 6 to 15 m, whereas a narrower range characterizes the other two cases.

In this paper, an innovative procedure for estimating the water flow elevation of rivers is proposed. Today, a shared and worldwide database containing historical and reliable data concerning the water surface elevation of rivers has not been completed. Many areas are still unmonitored and due to the large importance of fresh water, an evaluation of the river system is fundamental. The main scope of this research is contributing to solving this information-gap problem by designing a SAR signal processing technique having the capability to perform water flow level estimation. The problem of measuring such data is usually solved by designing an ATI SAR geometry, which is constituted by two radars spatially distanced by a baseline extended in the azimuth direction. In the case of space-borne missions the performing of ATI can be an unusual and difficult task. For several single-antenna spaceborne SAR satellite systems, the refocusing of ATI observations from one raw data is a problem because of the not-oversampled nature of the received electromagnetic bursts. This phenomenon makes raw data very similar to a white random process and appearing interlaced Doppler bands completely disjoint. After the range-Doppler focusing process, this problem causes decorrelation when observing the ATI phase of distributed targets. Spaceborne LOS level measurements could be taken into consideration only for small and very coherent targets and in any case were located within the same radar resolution cell. This paper proposed the application of a robust technique for tracking the double-bounce reflections of some principal bridges crossing the rivers and to measure the gap space existing between the river surface and the bridges. The developed algorithm tracked over time the double-bounce scattering event position reflected on the river surface with respect to the single-bounce and direct backscattered echoes form the principal structures of the bridge. River water-flow data were indirectly retrieved by converting the time-domain water surface variation in velocities. The experiments were evaluated by processing simulated and a long temporal series of COSMO-SkyMed data. 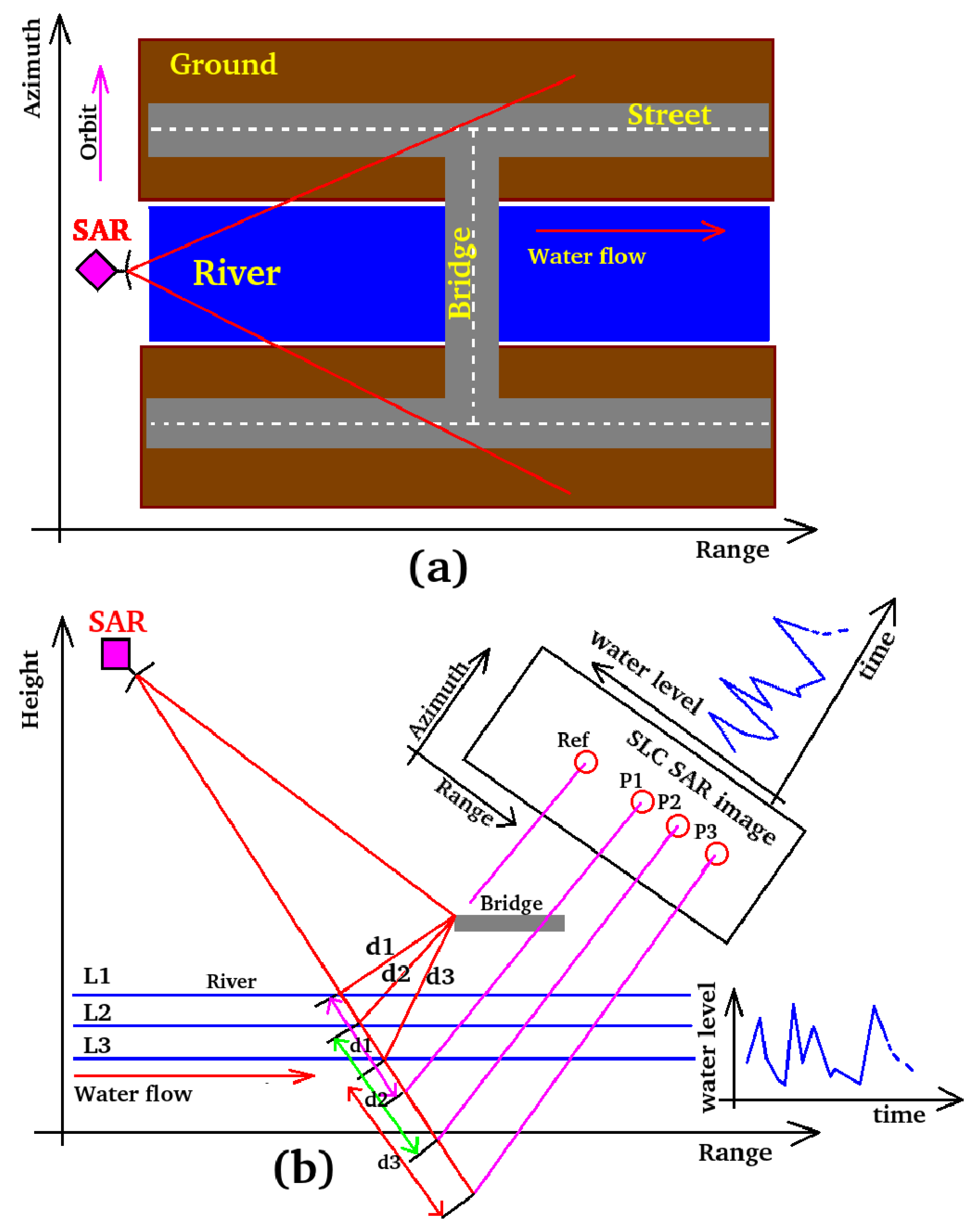 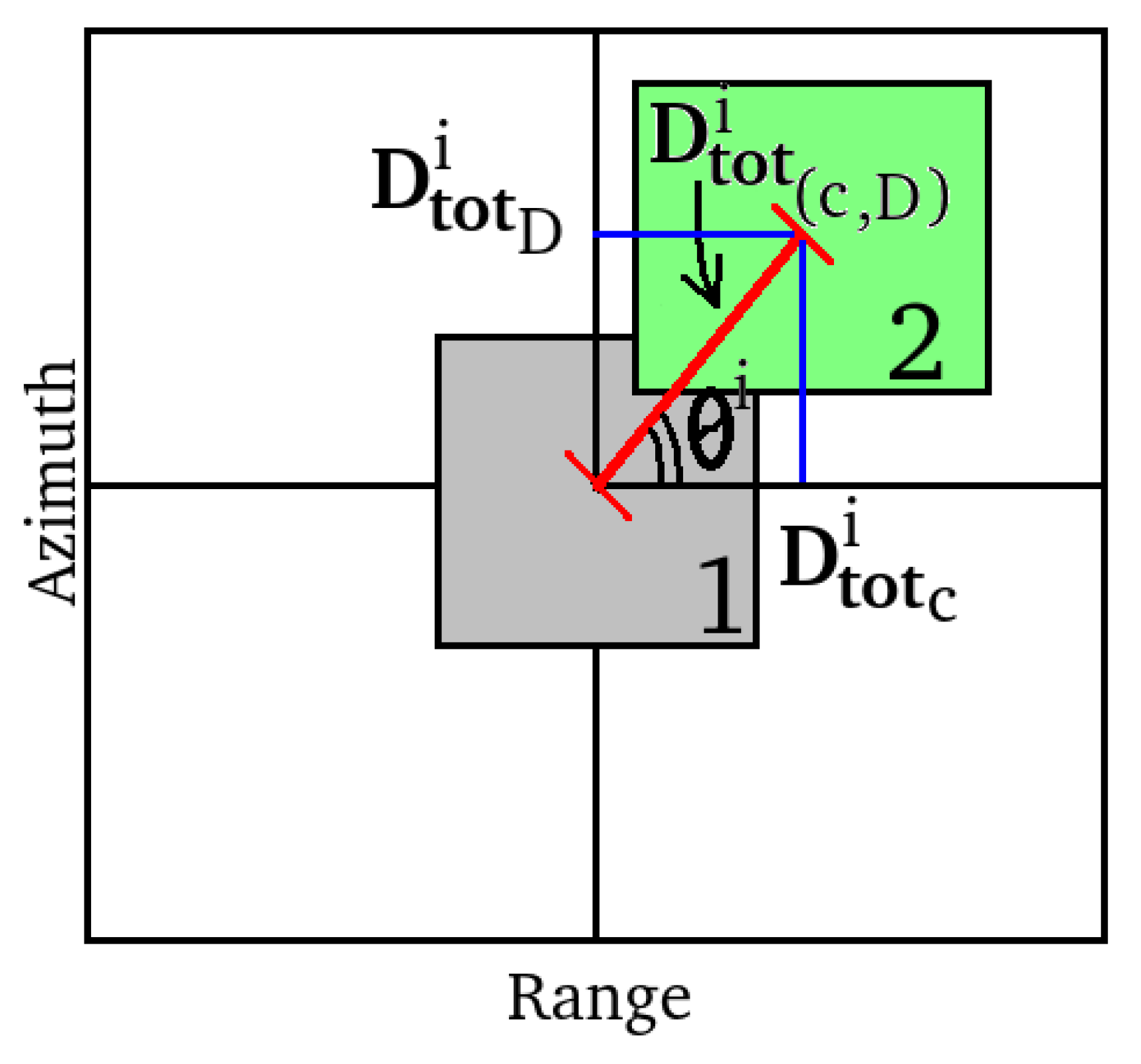 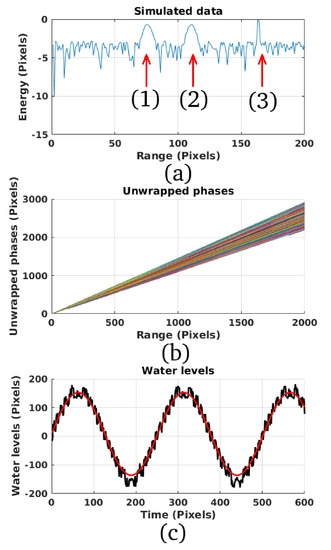 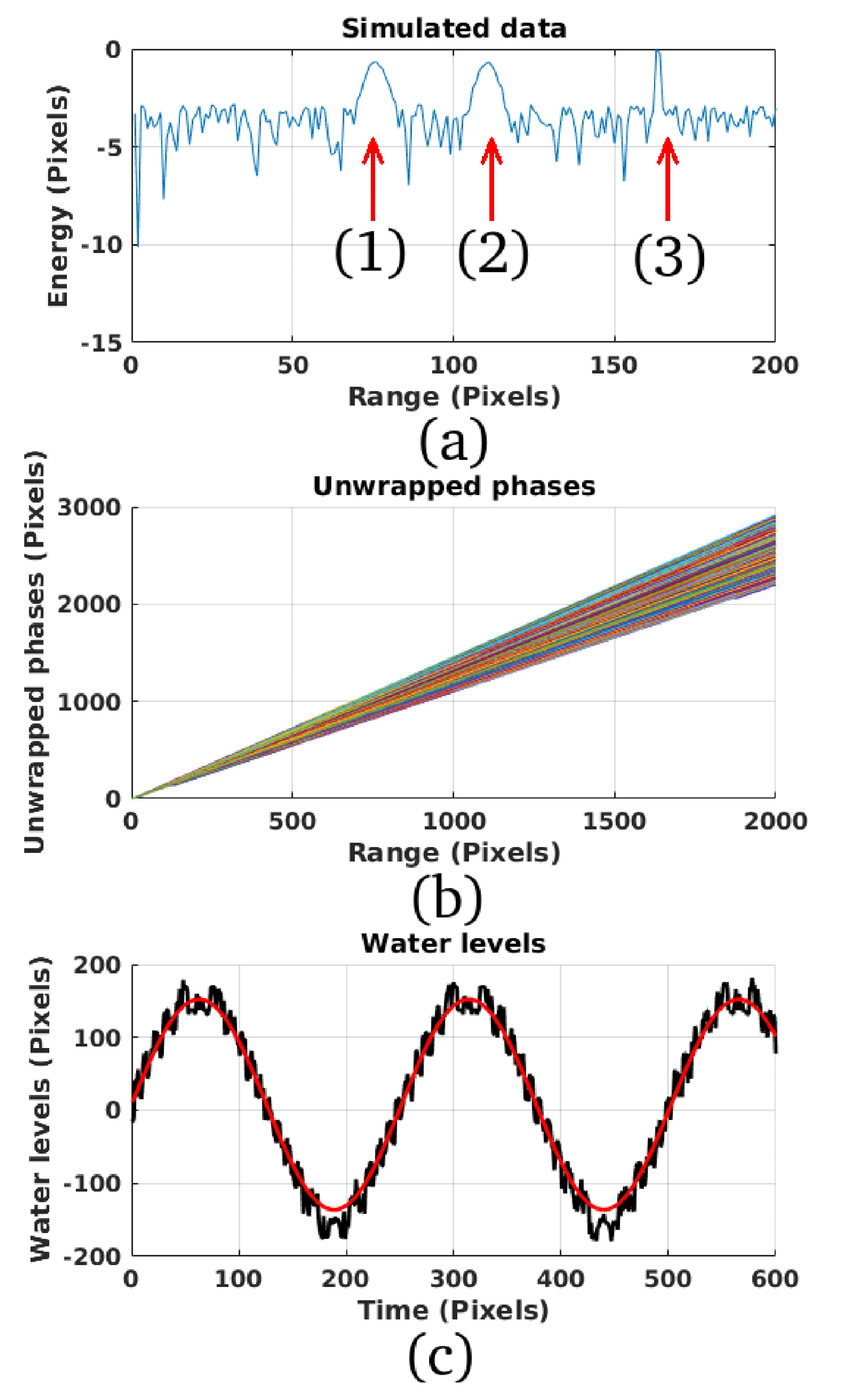 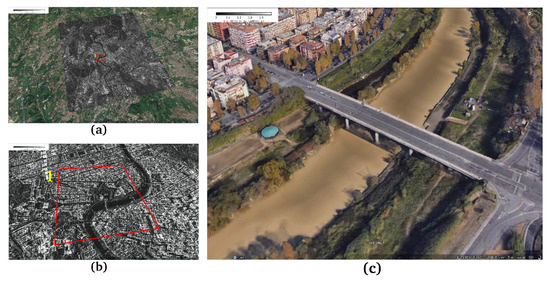