First Evaluation of Topography on GNSS-R: An Empirical Study Based on a Digital Elevation Model
Previous Article in Special Issue

Rainfall estimates based on satellite data are subject to errors in the position of the rainfall events in addition to errors in their intensity. This is especially true for localized rainfall events such as the convective rainstorms that occur during the monsoon season in sub-Saharan Africa. Many satellite-based estimates use gauge information for bias correction. However, bias adjustment methods do not correct the position errors explicitly. We propose to gauge-adjust satellite-based estimates with respect to the position using a morphing method. Image morphing transforms an image, in our case a rainfall field, into another one, by applying a spatial transformation. A benefit of this approach is that it can take both the position and the intensity of a rain event into account. Its potential is investigated with two case studies. In the first case, the rain events are synthetic, represented by elliptic shapes, while the second case uses real data from a rainfall event occurring during the monsoon season in southern Ghana. In the second case, the satellite-based estimate IMERG-Late (Integrated Multi-Satellite Retrievals for GPM ) is adjusted to gauge data from the Trans-African Hydro-Meteorological Observatory (TAHMO) network. The results show that the position errors can be corrected, while preserving the higher spatial variability of the satellite-based estimate. View Full-Text
Keywords: precipitation estimation; satellite-based precipitation; gauge data; IMERG; TAHMO; morphing; field displacement precipitation estimation; satellite-based precipitation; gauge data; IMERG; TAHMO; morphing; field displacement
►▼ Show Figures 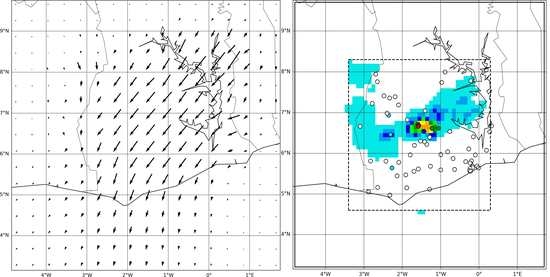