Satellite Retrieval of Downwelling Shortwave Surface Flux and Diffuse Fraction under All Sky Conditions in the Framework of the LSA SAF Program (Part 2: Evaluation)
Previous Article in Journal

Satellite Retrieval of Downwelling Shortwave Surface Flux and Diffuse Fraction under All Sky Conditions in the Framework of the LSA SAF Program (Part 1: Methodology)

Several studies have shown that changes in incoming solar radiation and variations of the diffuse fraction can significantly modify the vegetation carbon uptake. Hence, monitoring the incoming solar radiation at large scale and with high temporal frequency is crucial for this reason along with many others. The European Organization for the Exploitation of Meteorological Satellites (EUMETSAT) Satellite Application Facility for Land Surface Analysis (LSA SAF) has operationally disseminated in near real time estimates of the downwelling shortwave radiation at the surface since 2005. This product is derived from observations provided by the SEVIRI instrument onboard the Meteosat Second Generation series of geostationary satellites, which covers Europe, Africa, the Middle East, and part of South America. However, near real time generation of the diffuse fraction at the surface level has only recently been initiated. The main difficulty towards achieving this goal was the general lack of accurate information on the aerosol particles in the atmosphere. This limitation is less important nowadays thanks to the improvements in atmospheric numerical models. This study presents an upgrade of the LSA SAF operational retrieval method, which provides the simultaneous estimation of the incoming solar radiation and its diffuse fraction from the satellite every 15 min. The upgrade includes a comprehensive representation of the influence of aerosols based on physical approximations of the radiative transfer within an atmosphere-surface associated medium. This article explains the retrieval method, discusses its limitations and differences with the previous method, and details the characteristics of the output products. A companion article will focus on the evaluation of the products against independent measurements of solar radiation. Finally, the access to the source code is provided through an open access platform in order to share the expertise on the satellite retrieval of this variable with the community. View Full-Text
Keywords: solar radiation; diffuse; LSA SAF; aerosols; MSG SEVIRI; open source code solar radiation; diffuse; LSA SAF; aerosols; MSG SEVIRI; open source code
►▼ Show Figures 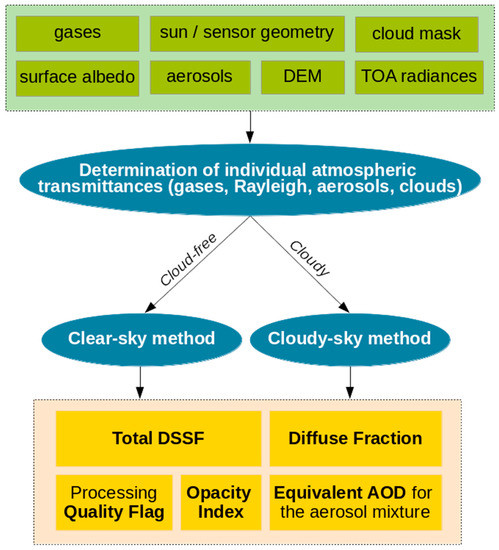