This paper evaluates Integrated Multi-Satellite Retrievals from GPM (IMERG-F) over Europe for the period 2014–2018 in order to evaluate application of the retrievals to hydrology. IMERG-F is compared with a large pan-European precipitation dataset built on rain gauge stations, i.e., the ENSEMBLES OBServation (E-OBS) gridded dataset. Although there is overall agreement in the spatial distribution of mean precipitation (R2 = 0.8), important discrepancies are revealed in mountainous regions, specifically the Alps, Pyrenees, west coast of the British Isles, Scandinavia, the Iberian and Italian peninsulas, and the Adriatic coastline. The results show that the strongest contributors to poor performance are pixels where IMERG-F has no gauges available for adjustment. If rain gauges are available, IMERG-F yields results similar to those of the surface observations, although the performance varies by region. However, even accounting for gauge adjustment, IMERG-F systematically underestimates precipitation in the Alps and Scandinavian mountains. Conversely, IMERG-F overestimates precipitation in the British Isles, Italian Peninsula, Adriatic coastline, and eastern European plains. Additionally, the research shows that gauge adjustment worsens the spatial gradient of precipitation because of the coarse resolution of Global Precipitation Climatology Centre data. View Full-Text
Keywords: precipitation; satellite observations; surface observations; IMERG; Europe precipitation; satellite observations; surface observations; IMERG; Europe
►▼ Show Figures 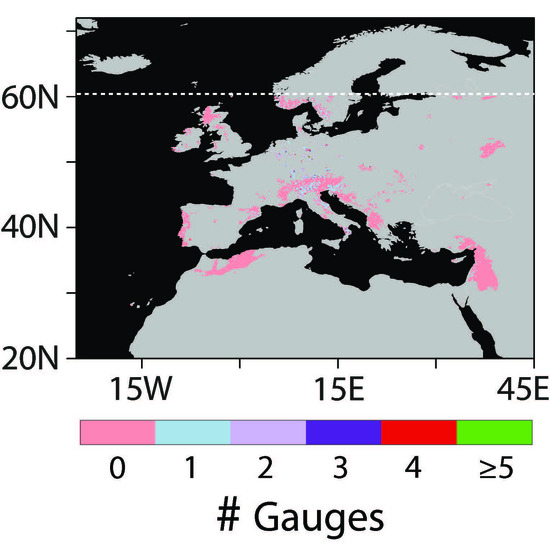