Sea surface temperatures (SSTs) derived from passive microwave (PMW) observations benefit global ocean and SST analyses because of their near-all-weather availability. Present PMW SSTs have a real aperture-limited spatial resolution in excess of 50 km, limiting the spatial fidelity with which SST features, reflecting ocean dynamics, can be captured. This contrasts with the target resolution of global analyses of 5 to 10 km. The Copernicus Imaging Microwave Radiometer (CIMR) is a mission concept under consideration as a high-priority candidate mission for the expansion of the Copernicus space programme. This instrument would be capable of real aperture resolution < 15 km with low total uncertainties in the range 0.4–0.8 K for channels between 1.4 and 36.5 GHz, and a dual-view arrangement that further reduces noise. This paper provides a comparative study of SST uncertainty and feature resolution with and without the availability of CIMR in the future SST-observing satellite constellation based on a detailed simulation of CIMR plus infrared observations and the processing of global SST analyses with 0.05° final grid resolution. Simulations of CIMR data including structured errors were added to an observing system consisting of the Sea and Land Surface Temperature Radiometer (SLSTR) on Sentinel-3A and the Advanced Very High Resolution Radiometer (AVHRR) on MetOp-A. This resulted in a large improvement in the global root-mean-square error (RMSE) for SST from 0.37 K to 0.21 K for January and 0.40 K to 0.25 K for July. There was a particularly noticeable improvement in the performance of the analysis, as measured by the reduction in RMSE, for dynamical and persistently cloudy areas. Of these, the Aghulas Current showed an improvement of 43% in January and 48% in July, the Gulf Stream showed 70% and 44% improvements, the Southern Ocean showed 57% and 74% improvements, and the Maritime Continent showed 50% and 40% improvements, respectively. View Full-Text
Keywords: passive microwave; sea surface temperature; CIMR; OSTIA passive microwave; sea surface temperature; CIMR; OSTIA
►▼ Show Figures 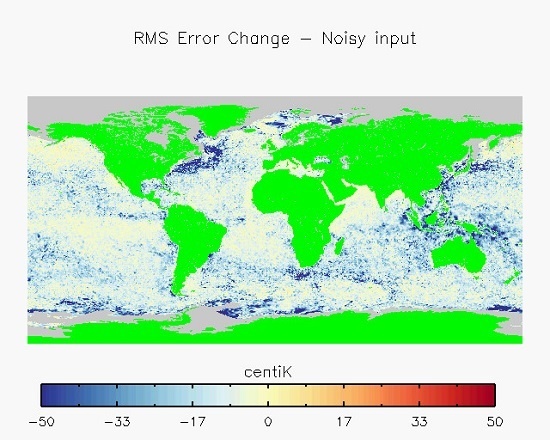