Rice is the staple food for more than half of humanity. Accurate prediction of rice harvests is therefore of considerable global importance for food security and economic stability, especially in the developing world. Landsat sensors have collected coincident thermal and optical images for the past 35+ years, and so can provide both retrospective and near-realtime constraints on the spatial extent of rice planting and the timing of rice phenology. Thermal and optical imaging capture different physical processes, and so provide different types of information for phenologic mapping. Most analyses use only one or the other data source, omitting potentially useful information. We present a novel approach to the mapping and monitoring of rice agriculture which leverages both optical and thermal measurements. The approach relies on Temporal Mixture Models (TMMs) derived from parallel Empirical Orthogonal Function (EOF) analyses of Landsat image time series. Analysis of each image time series is performed in two stages: (1) spatiotemporal characterization, and (2) temporal mixture modeling. Characterization evaluates the covariance structure of the data, culminating in the selection of temporal endmembers (EMs) representing the most distinct phenological cycles of either vegetation abundance or surface temperature. Modeling uses these EMs as the basis for linear TMMs which map the spatial distribution of each EM phenological pattern across study area. The two metrics we analyze in parallel are (1) fractional vegetation abundance (Fv) derived from spectral mixture analysis (SMA) of optical reflectance, and (2) land surface temperature (LST) derived from brightness temperature (Tb). These metrics are chosen on the basis of being straightforward to compute for any (cloud-free) Landsat 4-8 image in the global archive. We demonstrate the method using a 90 × 120 km area in the Sacramento Valley of California. Satellite Tb retrievals are corrected to LST using a standardized atmospheric correction approach and pixelwise fractional emissivity estimates derived from SMA. LST and Tb time series are compared to field station data in 2016 and 2017. Uncorrected Tb is observed to agree with the upper bound of the envelope of air temperature observations to within 3 °C on average. As expected, LST estimates are 3 to 5 °C higher. Soil T, air T, Tb and LST estimates can all be represented as linear transformations of the same seasonal cycle. The 3D temporal feature spaces of Fv and LST clearly resolve 5 and 7 temporal EM phenologies, respectively, with strong clustering distinguishing rice from other vegetation. Results from parallel EOF analyses of coincident Fv and LST image time series over the 2016 and 2017 growing seasons suggest that TMMs based on single year Fv datasets can provide accurate maps of crop timing, while TMMs based on dual year LST datasets can provide comparable maps of year-to-year crop conversion. We also test a partial-year model midway through the 2018 growing season to illustrate a potential real-time monitoring application. Field validation confirms the monitoring model provides an upper bound estimate of spatial extent and relative timing of the rice crop accurate to 89%, even with an unusually sparse set of usable Landsat images. View Full-Text
Keywords: spatiotemporal; rice; phenology; multisensor; thermal; Landsat; temporal mixture model spatiotemporal; rice; phenology; multisensor; thermal; Landsat; temporal mixture model
►▼ Show Figures 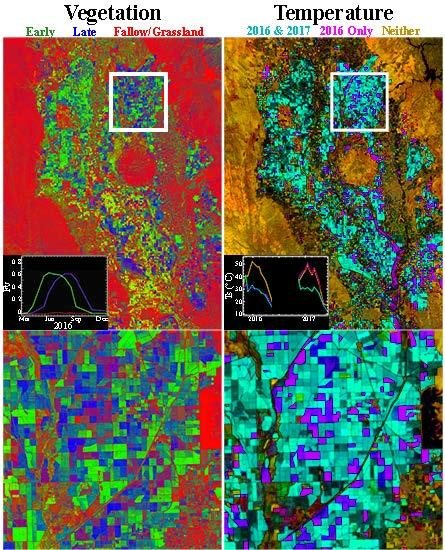