A large number of evenly distributed conjugate points (CPs) in entirely overlapping regions of the images are required to achieve successful co-registration between very-high-resolution (VHR) remote sensing images. The CPs are then used to construct a non-linear transformation model that locally warps a sensed image to a reference image’s coordinates. Piecewise linear (PL) transformation is largely exploited for warping VHR images because of its superior performance as compared to the other methods. The PL transformation constructs triangular regions on a sensed image from the CPs by applying the Delaunay algorithm, after which the corresponding triangular regions in a reference image are constructed using the same CPs on the image. Each corresponding region in the sensed image is then locally warped to the regions of the reference image through an affine transformation estimated from the CPs on the triangle vertices. The warping performance of the PL transformation shows reliable results, particularly in regions inside the triangles, i.e., within the convex hulls. However, the regions outside the triangles, which are warped when the extrapolated boundary planes are extended using CPs located close to the regions, incur severe geometric distortion. In this study, we propose an effective approach that focuses on the improvement of the warping performance of the PL transformation over the external area of the triangles. Accordingly, the proposed improved piecewise linear (IPL) transformation uses additional pseudo-CPs intentionally extracted from positions on the boundary of the sensed image. The corresponding pseudo-CPs on the reference image are determined by estimating the affine transformation from CPs located close to the pseudo-CPs. The latter are simultaneously used with the former to construct the triangular regions, which are enlarged accordingly. Experiments on both simulated and real datasets, constructed from Worldview-3 and Kompsat-3A satellite images, were conducted to validate the effectiveness of the proposed IPL transformation. That transformation was shown to outperform the existing linear/non-linear transformation models such as an affine, third and fourth polynomials, local weighted mean, and PL. Moreover, we demonstrated that the IPL transformation improved the warping performance over the PL transformation outside the triangular regions by increasing the correlation coefficient values from 0.259 to 0.304, 0.603 to 0.657, and 0.180 to 0.338 in the first, second, and third real datasets, respectively. View Full-Text
Keywords: improved piecewise linear transformation; very-high-resolution images; image warping; pseudo-conjugate points improved piecewise linear transformation; very-high-resolution images; image warping; pseudo-conjugate points
►▼ Show Figures 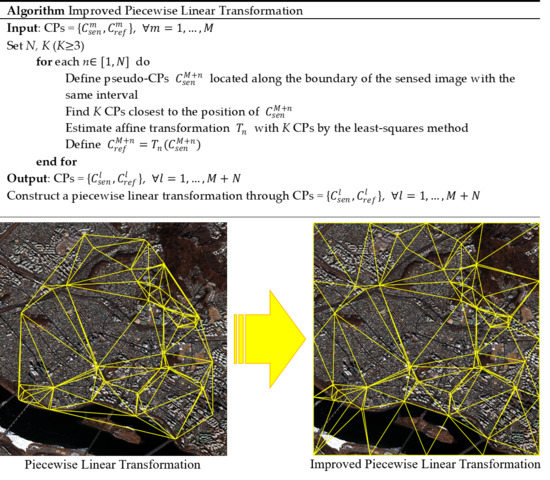