Numerous studies have shown an increased surface urban heat island intensity (SUHII) in many cities with urban expansion. Few studies, however, have investigated whether such intensification is mainly caused by urban warming, the cooling of surrounding nonurban regions, or the different rates of warming/cooling between urban and nonurban areas. This study aims to fill that gap using Beijing, China, as a case study. We first examined the temporal trends of SUHII in Beijing and then compared the magnitude of the land surface temperature (LST) trend in urban and nonurban areas. We further detected the temporal trend of LST (TrendLST) at the pixel level and explored its linkage to the temporal trends of EVI (TrendEVI) and NDBI (TrendNDBI). We used MODIS data from 2000 to 2015. We found that (1) SUHII significantly increased from 4.35 °C to 6.02 °C, showing an intensified surface urban heat island (SUHI) effect, with an annual increase rate of 0.13 °C in summer during the daytime and 0.04 °C in summer at night. In addition, the intensification of SUHII was more prominent in new urban areas (NUA). (2) The intensified SUHII, however, was largely caused by substantial cooling effects in nonurban areas (NoUA), not substantial warming in urban areas. (3) Spatially, there were large spatial variations in significant warming and cooling spots over the entire study area, which were related to TrendNDBI and TrendEVI. TrendNDBI significantly affected TrendLST in a positive way, while the TrendEVI had a significant positive effect (p = 0.023) on TrendLST only when EVI had an increasing trend. Our study underscores the importance of quantifying and comparing the changes in LST in both urban and nonurban areas when investigating changes in SUHII using time-series trend analysis. Such analysis can provide insights into promoting city-based urban heat mitigation strategies which focused on both urban and nonurban areas. View Full-Text
Keywords: urban heat island; land surface temperature; trend analysis; urban warming; urban ecology; Beijing urban heat island; land surface temperature; trend analysis; urban warming; urban ecology; Beijing
►▼ Show Figures 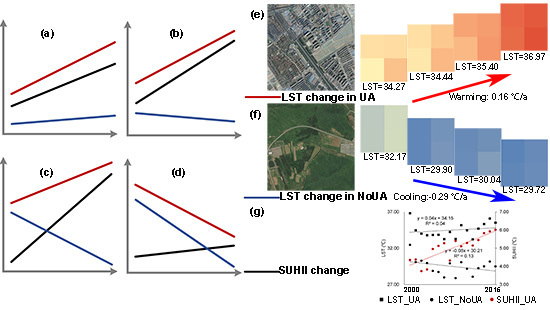