In order to avoid introducing errors of orbital simulation, this study uses the positions of GPS satellites and TDS-1 GPS-R receiver in the TDS-1 satellite data to position the specular reflection points. The static-state geoid undulation and time-varying tidal height used in the elevation correction are calculated based on the Earth Gravitational Model 2008 (EGM2008) earth gravitational model and the TPXO8 ocean tidal model, respectively.

The GNSS-R payload on the TDS-1 consists of the antennas receiving direct and reflection GPS signals and a remote sensing receiver. The receiver records the reflections’ time and the corresponding spatial coordinates of the GPS satellites, the receiver and the specular reflection points, those positions are contained in the TDS-1 Level-1 metadata (obtained from: ftp://ftp.merrbys.co.uk) [18]. In this study, we used a total of 14,768 reflections from 43 tracks in April 2018. According to the orbital altitude and the inclination of TDS-1 satellite, these tracks cover almost all the latitudes and longitudes except the polar zone with ice sheet [13], having a good coverage on the distributions of the ocean tidal amplitude and phase.

The spatial resolution of the EGM2008 model is about 5′ × 5′, and the geoid undulation propagated standard deviation is 10.925 cm [41]. This study used the highest spatial resolution model which is interpolated to a 1′ × 1′ grid and the interpolation error does not exceed ±1 mm [42].

The TPXO8 model is a global ocean tidal model developed by Egbert and Erofeeva of Oregon State University. The model provides tides as complex amplitudes of earth-relative sea-surface elevation for eight primary, two long period and three non-linear harmonic constituents [28,29,30]. This study discusses the influence of tidal height variation in offshore shallow waters on the correction, requiring the support of high-accuracy and high-spatial-resolution tidal predictions in offshore where tides change complexly. TPXO8 model has strengthened the accuracy and the spatial resolution for offshore in two aspects: 1) TPXO8 has performed harmonic analysis along track on the altimetry data of satellites such as TOPEX/Poseidon and Jason1/2, and added data of tide gauge, Envisat and ERS in the shallow water area. The non-linear 1/4 day period tidal constituent has also been considered to improve the accuracy in the offshore. 2) 33 high-resolution regional assimilation models of 1/30° are developed and added to TPXO8 global model calculation result with resolution of 1/6°. These regions are mainly closed and semi-enclosed oceans and most of the continental shelve coastal areas. Additionally, TPXO8 uses the General Bathymetric Chart of the Oceans (GEBCO) 1′ bathymetric data in available offshore areas to improve accuracy and spatial resolution.

Predicting HT at a given location and time requires tidal analysis based on the tidal model, that is, the separation and estimation of tidal parameters, and the prediction of tides based on these parameters. In order to facilitate the prediction of tides, the tide is decomposed into a superposition of sine waves with different periods and amplitudes. Each different sine wave represents a different tidal constituent, and the superposition of all these sine waves constitutes a tidal wave that changes with time. The main method of modern tidal analysis and prediction is the harmonic analysis method, which is to estimate the amplitude and phase of a tidal constituent with a specified period. That is, to solve the tidal harmonic constants according to the tidal height expression and the actual observation data, so that the total tidal height can be obtained.
1.  Extracting the harmonic constants of the tidal constituents.
The harmonic constants are extracted from a barotropic tidal solutions of the TPXO8 model to predict tide. The prediction obtains the global barotropic inverse tidal solutions based on the Ohio State University (OSU) Tidal Inversion Software (OTIS) used with TPXO model. At the reflection time t and the geodetic coordinates (b, l), the tidal height h for a single constituent of frequency “w” is given by Egbert et al., [30]:
h(b, l, t) = fu(b, l, t) Re [h(b, l)exp {i [w(t − t0) + P(t0) + fh(b, l, t)]}],
where P is the astronomical argument for the constituent at initial time t0, fu and fh are nodal corrections. The amplitude A and phase K are given by Egbert et al., [30]:
A = |h|,
K = arctan[−Im(h)/Re(h)].
2.  Performing harmonic analysis to predict tidal height.
Based on the harmonic constants of the tidal constituents, the total tidal height HT is solved by harmonic analysis, as follows [43], Bao et al.]:where L is the average sea surface height during observation, and n is the number of tidal constituents. From Equations (3) and (8), σX, σY, σZ for each iteration can be expressed as: After m times iterative correction, the cut-off threshold is satisfied, the total tidal time-varying elevation correction components ωX, ωY, ωZ are as follows: The improvement of the positioning relative to the reference ellipsoid by the OTCP method is the spatial distance CT between the specular reflection point on the ocean tidal surface and that on the ellipsoid, expressed as follows: Similarly, for the static-state elevation correction, after g times iterative correction, the cut-off threshold is satisfied, and the total static-state elevation correction components δX, δY, δZ are as follows: The improvement of the positioning accuracy by the static-state elevation correction to the ellipsoid positioning is the spatial distance CG between the specular reflection point on geoid and that on the ellipsoid, expressed as follows: The positioning accuracy improvement C by the OTCP method to the geoid positioning is the vector difference between CT and CG: The results of C are discussed in detail in Section 2.3.
The average value R of the tidal time-varying elevation correction gradient modulo of a track (or segment) containing u specular reflection points can be expressed as: According to Equations (8)–(15), the tidal elevation positioning correction gradient modulo is affected by both the tidal height and the geoid undulation. The former differs according to time and geographical location like offshore/deep sea, the latter is determined by gravity anomaly at the location of the specular reflection point. This issue is discussed in Section 3.
The above tidal time-varying elevation correction positioning is based on the assumption that the normal and the radial directions of the specular reflection point are identical. Actually, there is a difference, which would result in positioning error. Therefore, it is necessary to further correct the specular reflection point to the plane perpendicular to its normal projection. The normal projection correction method is applied by directly solving spatial geometric relationship between the normal projection and the reflection path without approximation. The positioning errors of normal-radial difference and approximate substitution are reduced [13].

In addition to the important characteristics of time-varying, ocean tides have different variations in the offshore and in the deep sea. Since the tide difference is affected by tidal forces, topography and other conditions, it varies by time and location and it is larger in the offshore than in the deep sea. Due to the non-linearity of tidal power in the offshore, additional tidal constituents such as overtides or compound tides are formed. These tidal constituents have complexities of nonlinearities, small amplitudes and short wavelength. These tidal constituents interact with other principal tidal constituents (such as the most active M4 tidal constituent interacting with the M2 tidal constituent) with amplitudes reaching a significant range (the M4 tidal constituent reaches 1 cm in some areas of the Atlantic [44]), which has a negligible effect on tidal height and its changes. In addition, as the depth of the offshore water becomes shallower than in the deep sea, the friction between the tide wave and the bottom of the seabed changes the propagation process [24], and the propagation of the tide wave is more complicated than in the deep sea. Due to the diversity of offshore straits and bay forms (long straits, semi-enclosed wide bays, narrow long semi-closed bays, etc.), tide waves and tide difference in offshore vary in variety and characteristics, and they are more complex than those in deep seas [45]. Therefore, the influence of the offshore tidal height variation characteristics on the positioning of specular reflection points needs to be taken seriously. The TPXO8 ocean tidal model assimilates the altimeter data and the model is enhanced in accuracy and resolution in the offshore, it can calculate the global offshore tide amplitude distribution of high quality. In this section, the offshore part of the specular reflection point track is separated from the deep sea part, and then their tidal height variation and the different influences on the tidal correction are compared.

3.2. Division of Offshore and Deep Sea

Based on the GNSS-R reflection reference surface elevation correction principle, this study uses the main parameters that determine the real-time variation of sea surface height, the ocean tide, to construct ocean tidal correction positioning method. The OTCP method is applied to correct the specular reflection point from geoid to the ocean tidal surface. The positioning error caused by the time-varying elevation difference of the reflection reference surface is reduced, the positioning based on the static-state elevation correction is improved. In addition, the different effects of the tides on the gradient of the tidal positioning accuracy improvement in the offshore and deep sea are discussed. According to the research results, the OTCP method improves the positioning by about 0.31 m relative to the geoid positioning. The improvement of positioning accuracy has a good correlation with the tidal height of different amplitudes and phases combinations. In the offshore, the tidal height gradient is larger than the deep sea, and the tidal positioning correction gradient modulo has a good response to the tidal height gradient modulo. In the deep sea, the sensitivity of the response decreases compared to the offshore.

The TDS-1 SGR-RESI data used in this study is supported by the MERRByS team of Surrey Satellite Technology Limited. 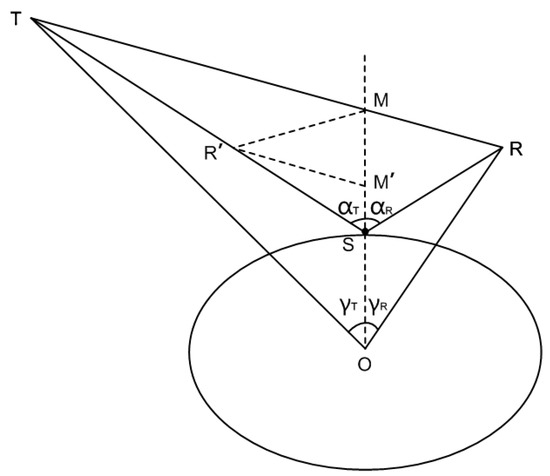 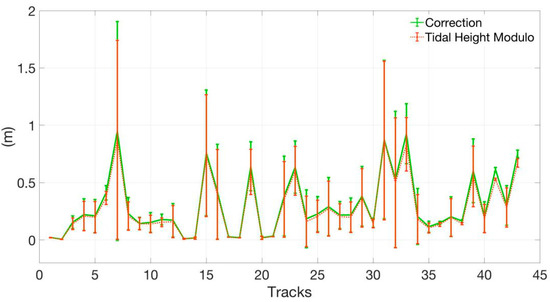 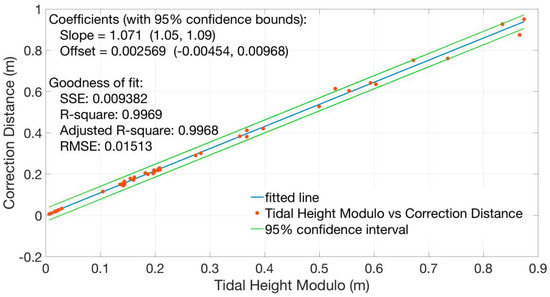 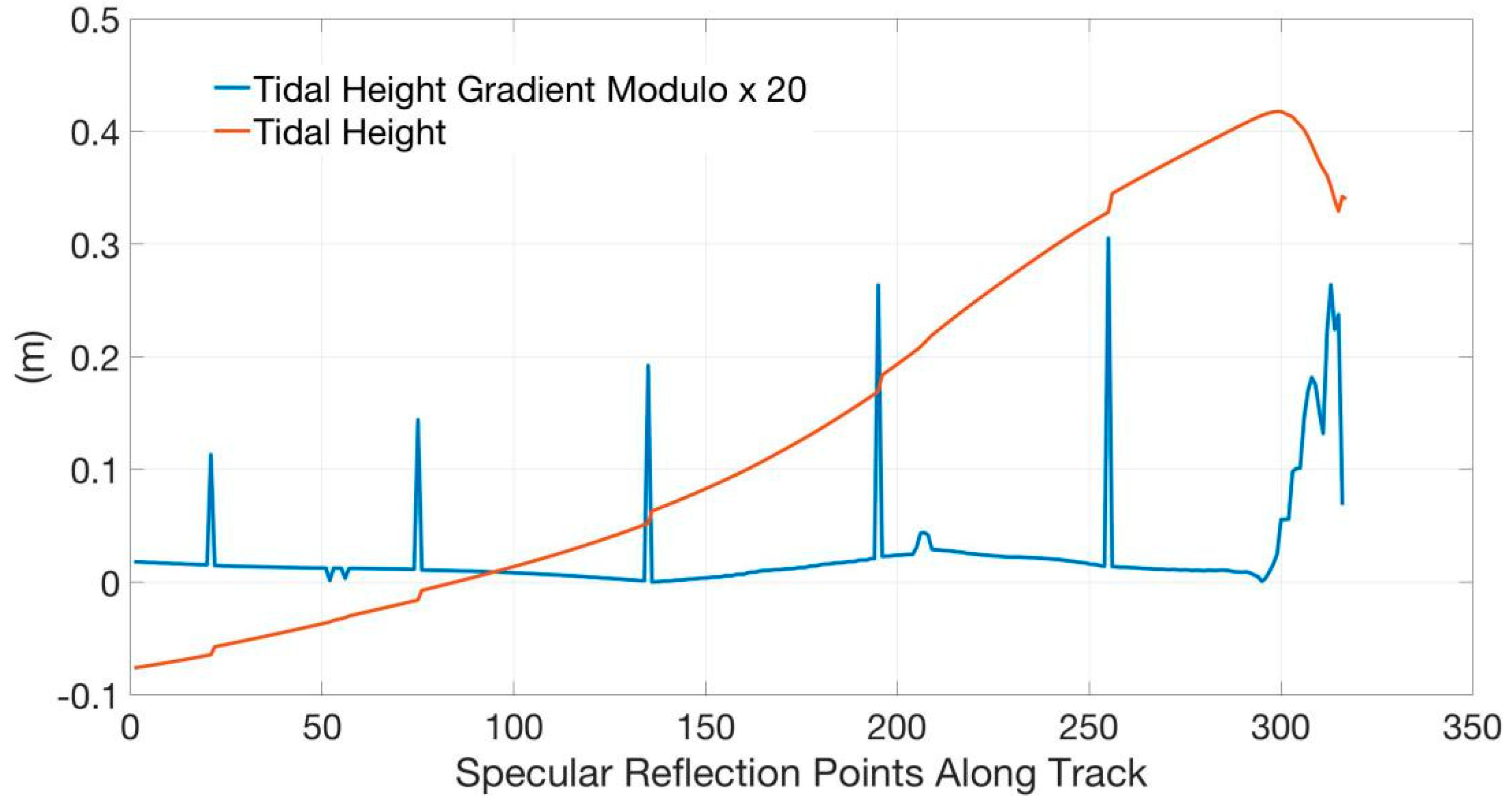 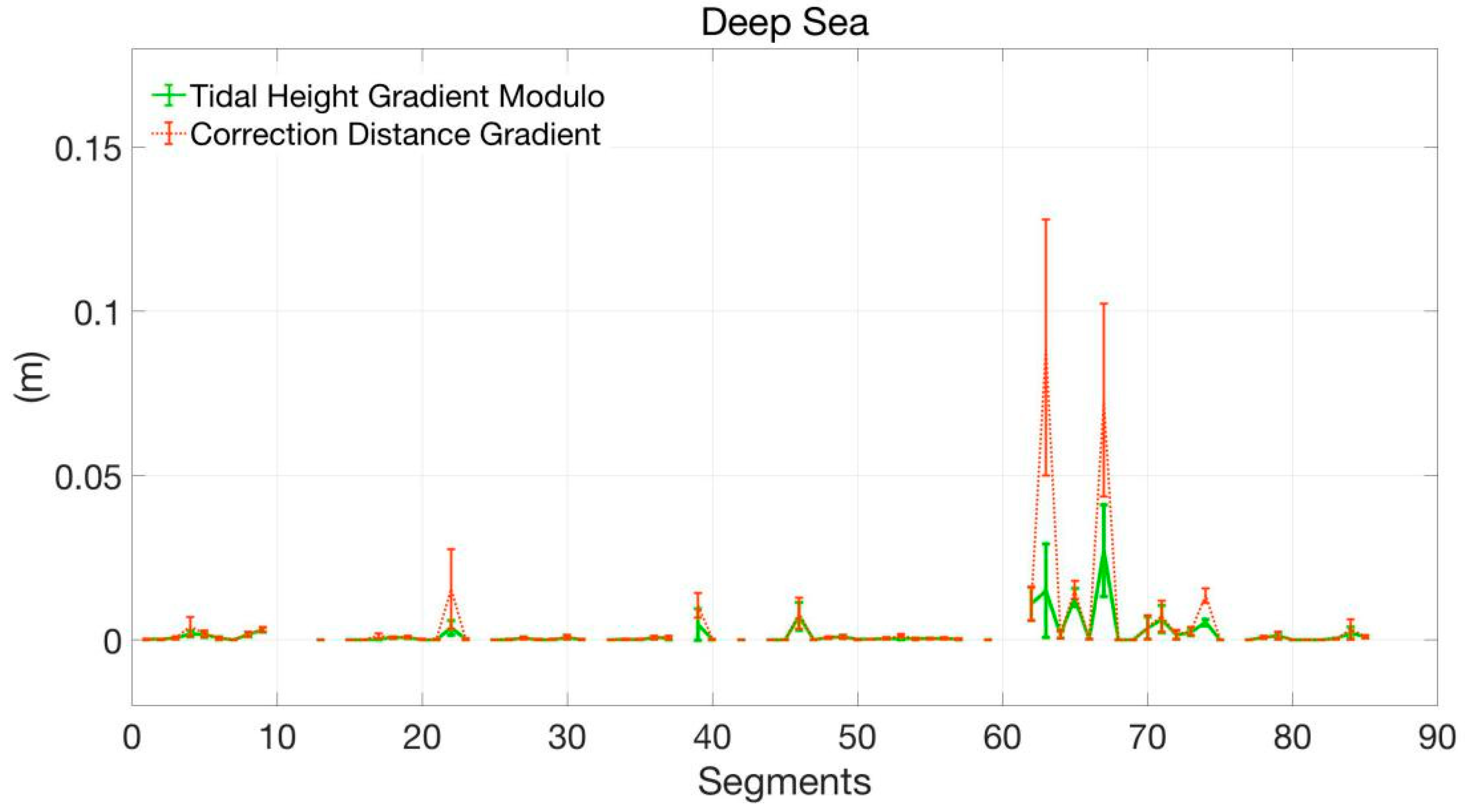 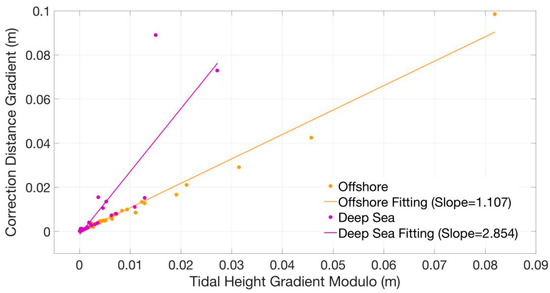 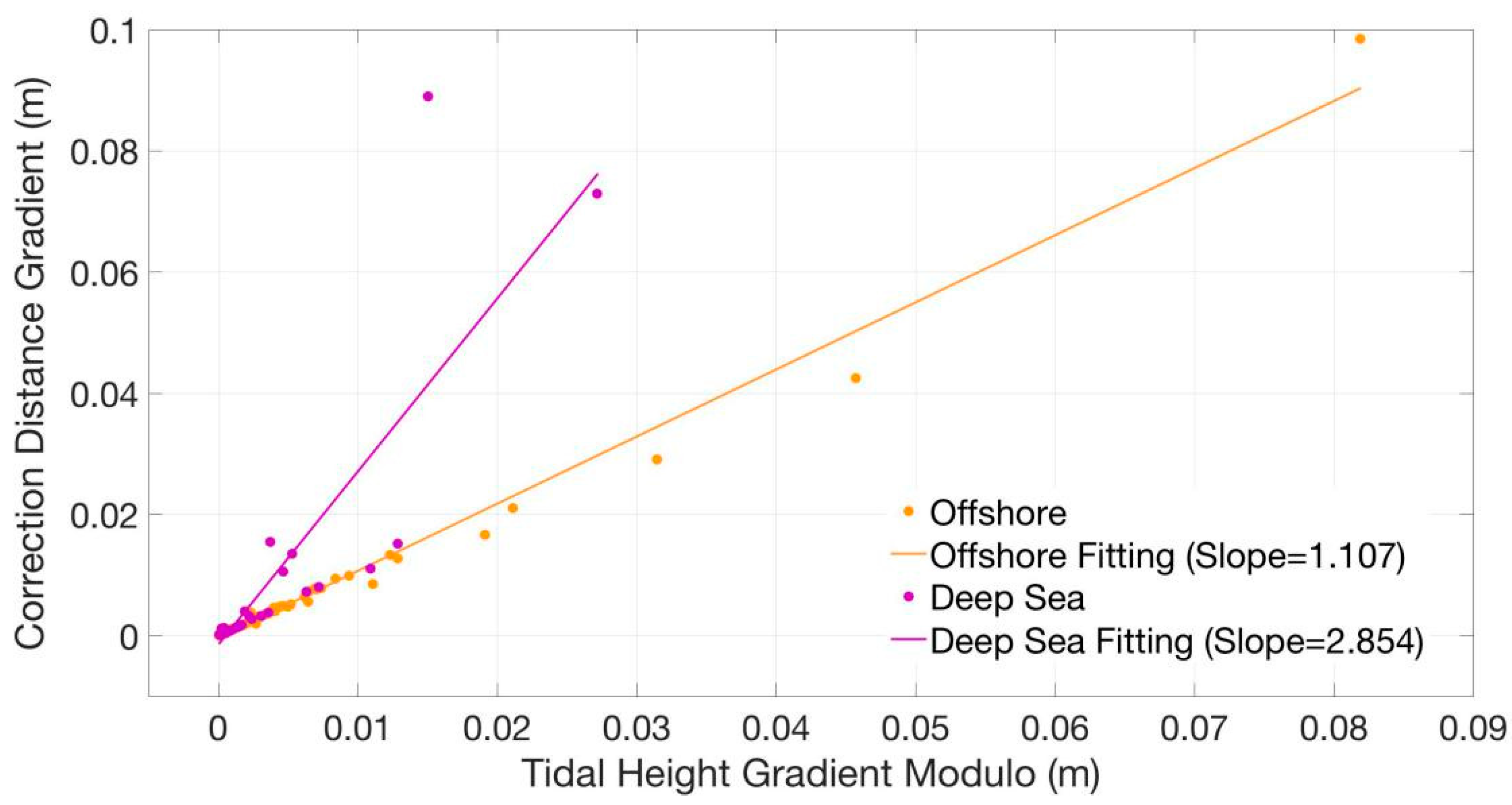