Malawi, in south-eastern Africa, is one of the poorest countries in the world. Food security in the country hinges on rainfed systems in which maize and sorghum are staple cereals and groundnut and pigeonpea are now major grain legume crops. While the country has experienced a considerable reduction in forest lands, population growth and demand for food production have seen an increase in the area dedicated to agricultural crops. From 2010, pigeonpea developed into a major export crop, and is commonly intercropped with cereals or grown in double-up legume systems. Information on the spatial extent of these crops is useful for estimating food supply, understanding export potential, and planning policy changes as examples of various applications. Remote sensing analysis offers a number of efficient approaches to deliver spatial, reproducible data on land use and land cover (LULC) and changes therein. Moderate Resolution Imaging Spectroradiometer (MODIS) products (fortnightly and monthly) and derived phenological parameters assist in mapping cropland areas during the agricultural season, with explicit focus on redistributed farmland. Owing to its low revisit time and the availability of long-term period data, MODIS offers several advantages, e.g., the possibility of obtaining cloud-free Normalized Difference Vegetation Index (NDVI) profile and an analysis using one methodology applied to one sensor at regular acquisition dates, avoiding incomparable results. To assess the expansion of areas used in the production of pigeonpea and groundnut resulting from the release of new varieties, the spatial distribution of cropland areas was mapped using MODIS NDVI 16-day time-series products (MOD13Q1) at a spatial resolution of 250 m for the years 2010–2011 and 2016–2017. The resultant cropland extent map was validated using intensive ground survey data. Pigeonpea is mostly grown in the southern dry districts of Mulanje, Phalombe, Chiradzulu, Blantyre and Mwanza and parts of Balaka and Chikwawa as a groundnut-pigeonpea intercrop, and sorghum-pigeonpea intercrop in Mzimba district. By 2016, groundnut extent had increased in Mwanza, Mulanje, and Phalombe and fallen in Mzimba. The result indicates that the area planted with pigeonpea had increased by 29% (75,000 ha) from 2010–2011 to 2016–2017. Pigeonpea expansion in recent years has resulted from major export opportunities to Asian countries like India, and its consumption by Asian expatriates all over the world. This study provides useful information for policy changes and the prioritization of resources allocated to sustainable food production and to support smallholder farmers. View Full-Text
Keywords: crop monitoring; MODIS; spectral profile; NDVI; cropping patterns; groundnut; pigeonpea and market oriented development crop monitoring; MODIS; spectral profile; NDVI; cropping patterns; groundnut; pigeonpea and market oriented development
►▼ Show Figures 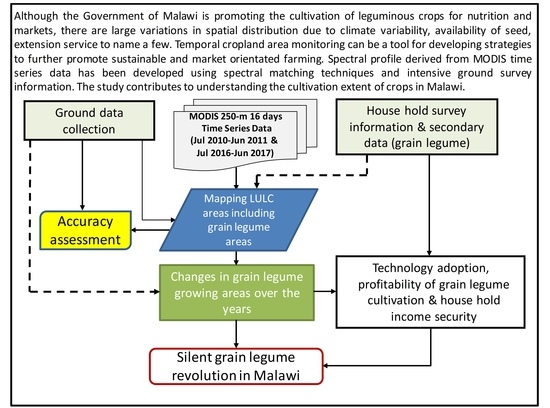