Airborne lidar has been widely used for forest characterization to facilitate forest ecological and management studies. With the availability of increasingly higher point density, individual tree delineation (ITD) from airborne lidar point clouds has become a popular yet challenging topic, due to the complexity and diversity of forests. One important step of ITD is segmentation, for which various methodologies have been studied. Among them, a long proven image segmentation method, mean shift, has been applied directly onto 3D points, and has shown promising results. However, there are variations among those who implemented the algorithm in terms of the kernel shape, adaptiveness and weighting. This paper provides a detailed assessment of the mean shift algorithm for the segmentation of airborne lidar data, and the effect of crown top detection upon the validation of segmentation results. The results from three different datasets revealed that a crown-shaped kernel consistently generates better results (up to 7 percent) than other variants, whereas weighting and adaptiveness do not warrant improvements. View Full-Text
Keywords: individual tree detection; 3D clustering; airborne laser scanning; point cloud individual tree detection; 3D clustering; airborne laser scanning; point cloud
►▼ Show Figures 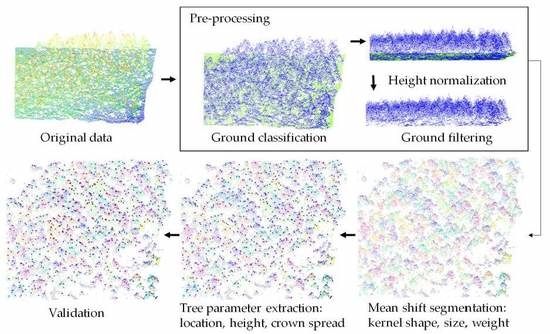