Towards a Traceable Climate Service: Assessment of Quality and Usability of Essential Climate Variables
Next Article in Special Issue

This study shows a simplified approach for calculating emissions associated with forest fires in Mexico, based on different satellite observation products: the biomass, burnt area, emission factors, and burning efficiency. Biomass loads were based on a Mexican biomass map, updated with the net primary productivity products. The burning efficiency was estimated from a Random Forest Regression (RFR) model, which considered the fuel, weather and topographical conditions. The burned areas were the downloaded Maryland University MCD64c6 product. The emission factors were obtained from well-known estimations, corrected by a dedicated US Forest Service and Mexican campaign. The uncertainty was estimated from an integrative method. Our method was applied to a four-year period, 2011–2014, in three Mexican ecoregions. The total burned in the study region was 12,898 km2 (about 4% of the area), producing 67.5 (±20) Tg of CO2. Discrepancies of the land cover maps were found to be the main cause of a low correlation between our estimations and the Global Emission Database (GFED). The emissions were clearly associated to precipitation patterns. They mainly affected dry and tropical forests (almost 50% of all emissions). Six priority areas were identified, where prevention or mitigation measures must be implemented. View Full-Text
Keywords: gas emissions; remote sensing; machine learning gas emissions; remote sensing; machine learning
►▼ Show Figures 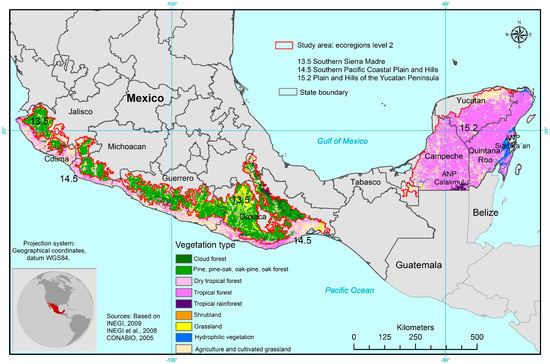