Quantifying terminal-lake dynamics is crucial for understanding water-ecosystem-economy relationship across endorheic river basins in arid environments. In this study, the spatio-temporal variations in terminal lakes of the lower Heihe River Basin were investigated for the first time since the Ecological Water Diversion Project commenced in 2000. The lake area and corresponding water consumption were determined with 248 Landsat images. Vital recovery of lakes occurred two years after the implementation of the project, and the total lake area increased by 382.6%, from 30.7 to 148.2 km2, during 2002–2017. East Juyan Lake (EJL) was first restored as a project target and subsequently reached a maximum area of 70.1 km2. Water dispersion was initiated in 2003, with the East river prioritized for restoration. Swan Lake in the East river enlarged to 67.7 km2 by 2017, while the other four lakes temporarily existed or maintained an area < 7 km2, such as West Juyan Lake. Water consumed by lakes increased synchronously with lake area. The average water consumption of the six lakes was 1.03 × 108 m3/year, with 63% from EJL. The increasing terminal lakes; however, highlight the seasonal competition for water use between riparian vegetation and lake ecosystems in water-limited areas. View Full-Text
Keywords: desert terminal-lake dynamic; water consumption; water management; remote sensing; Heihe River Basin desert terminal-lake dynamic; water consumption; water management; remote sensing; Heihe River Basin
►▼ Show Figures 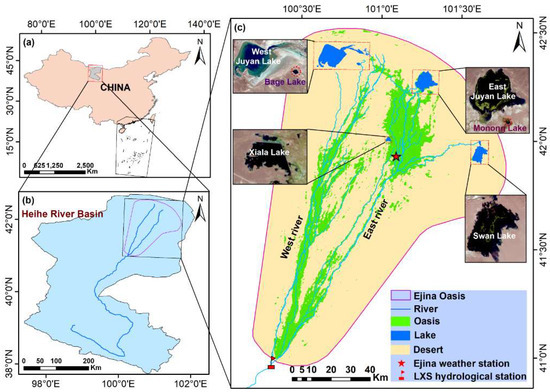