Up-to-date 3D city models are needed for many applications. Very-high-resolution (VHR) images with rich geometric and spectral information and a high update rate are increasingly applied for the purpose of updating 3D models. Shadow detection is the primary step for image interpretation, as shadow causes radiometric distortions. In addition, shadow itself is valuable geometric information. However, shadows are often complicated and environment-dependent. Supervised learning is considered to perform well in detecting shadows when training samples selected from these images are available. Unfortunately, manual labeling of images is expensive. Existing 3D models have been used to reconstruct shadows to provide free, computer-generated training samples, i.e., samples free from intensive manual labeling. However, accurate shadow reconstruction for large 3D models consisting of millions of triangles is either difficult or time-consuming. In addition, due to inaccuracy and incompleteness of the model, and different acquisition time between 3D models and images, mislabeling refers to training samples that are shadows but labeled as non-shadows and vice versa. We propose a ray-tracing approach with an effective KD tree construction to feasibly reconstruct accurate shadows for a large 3D model. An adaptive erosion approach is first provided to remove mislabeling effects near shadow boundaries. Next, a comparative study considering four classification methods, quadratic discriminant analysis (QDA) fusion, support vector machine (SVM), K nearest neighbors (KNN) and Random forest (RF), is performed to select the best classification method with respect to capturing the complicated properties of shadows and robustness to mislabeling. The experiments are performed on Dutch Amersfoort data with around 20% mislabels and the Toronto benchmark by simulating mislabels from inverting shadows to non-shadows. RF is tested to give robust and best results with 95.38% overall accuracy (OA) and a value of 0.9 for kappa coefficient (KC) for Amersfoort and around 96% OA and 0.92 KC for Toronto benchmarks when no more than 50% of shadows are inverted. QDA fusion and KNN are tested to be robust to mislabels but their capability to capture complicated properties of shadows is worse than RF. SVM is tested to have a good capability to separate shadow and non-shadows but is largely affected by mislabeled samples. It is shown that RF with free-training samples from existing 3D models is an automatic, effective, and robust approach for shadow detection from VHR images. View Full-Text
Keywords: shadow detection; 3D city model; free training; ray tracing; KD tree; erosion; mislabels; random forest; robust shadow detection; 3D city model; free training; ray tracing; KD tree; erosion; mislabels; random forest; robust
►▼ Show Figures 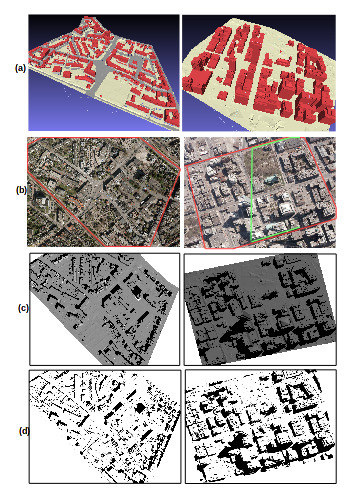