Investigation of Ground Deformation in Taiyuan Basin, China from 2003 to 2010, with Atmosphere-Corrected Time Series InSAR
Previous Article in Special Issue

The dynamics and evolution of a coastal sandy system over the last 142 years (1875–2017) were analyzed using geomatics techniques (historical cartography, photogrammetry, topography, and terrestrial laser scanning (TLS)). The continuous beach–dune system is a very active confining sand barrier closing an estuarine system where damage is suffered by coastal infrastructures and houses. The techniques used and documentary sources involved historical cartography, digitalizing the 5-m-level curve on the maps of 1875, 1908, 1920, 1950, and 1985; photogrammetric flights of 1985, 1988, and 2001 without calibration certificates, digitalizing only the upper part of the sandy front; photogrammetric flights of 2005, 2007, 2010, and 2014, using photogrammetric restitution of the 5-m-level curve; topo-bathymetric profiles made monthly between 1988 and 1993 using a total station; a terrestrial laser scanner (TLS) since 2011 by means of two annual measurements; and the meteorological data for the period of 1985–2017. The retreat of the sandy complex was caused by winter storms with large waves and swells higher than 6 m, coinciding with periods demonstrating a high tidal range of over 100 and periods with a large number of strong storms. The retreat was 8 m between December 2013 and March 2014. The overall change of the coastline between 1875 and 2017 was approximately 415 m of retreat at Somo Beach. The erosive processes on the foredune involved the outcrop of the rock cliff in 1999 and 2014, which became a continuous rocky cliff without sands. To know the recent coastal evolution and its consequences on the human environment, the combined geomatic techniques and future TLS data series may lead to the improvement in the knowledge of shoreline changes in the context of sea level and global changes. View Full-Text
Keywords: coastal geomorphology; monitoring; morphology; geomatic techniques; sandy systems coastal geomorphology; monitoring; morphology; geomatic techniques; sandy systems
►▼ Show Figures 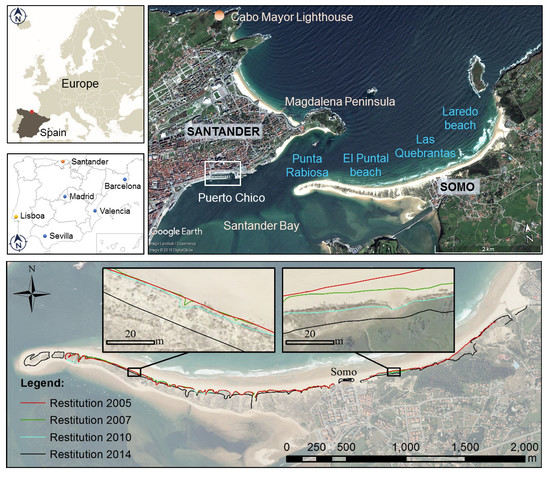