Investigation of Ground Deformation in Taiyuan Basin, China from 2003 to 2010, with Atmosphere-Corrected Time Series InSAR
Previous Article in Journal

Evaluation of the Stability of the Darbandikhan Dam after the 12 November 2017 Mw 7.3 Sarpol-e Zahab (Iran–Iraq Border) Earthquake

We used a global positioning system (GPS), levelling, and Sentinel-1 data to evaluate the stability of the Darbandikhan dam in northeast Iraq after the 2017 Mw 7.3 Sarpol-e Zahab earthquake. GPS and levelling datasets collected in March and November 2017 were used to compute the co-seismic surface displacements of the dam. Sentinel-1 synthetic aperture radar (SAR) images collected between October 2014 and March 2018 were employed to recover the displacement time series of the dam. The large-magnitude displacement gradient on the dam crest hindered the estimation of the co-seismic displacement using this medium-resolution SAR data. However, Sentinel-1 images are sufficient to examine the stability of the dam displacement before and after the earthquake. The results show that the dam was stable between October 2014 and November 2017, but after the earthquake, Sentinel-1 data shows a continuous subsidence of the dam crest between November 2017 and March 2018. To the best knowledge of the authors, this study is the first that utilises InSAR to investigate the behaviour of a dam after a large earthquake. View Full-Text
Keywords: earthfill dam; InSAR; earthquake; monitoring; surveying; GPS earthfill dam; InSAR; earthquake; monitoring; surveying; GPS
►▼ Show Figures 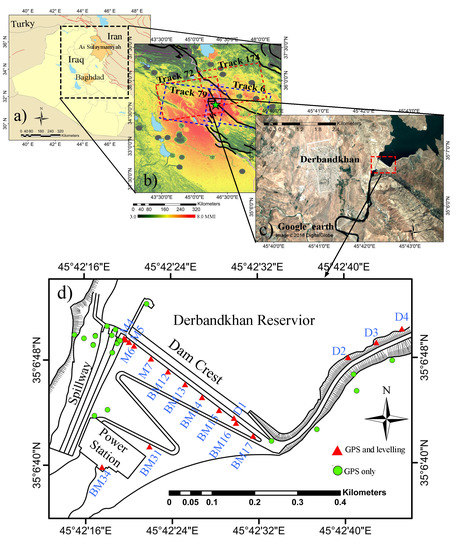