As part of the activities for the Global Energy and Water Exchanges (GEWEX) water vapor assessment project, the consistency of satellite-observed upper tropospheric humidity (UTH) and total column water vapor (TCWV) is examined. The examination is focused on their respective patterns during major El Niño events. The analysis shows that the two datasets, consisting of one measurement of vertically averaged relative humidity in the upper troposphere and one of absolute water vapor integrated over the atmospheric vertical column with dominant contribution from the lower troposphere, are consistent over the equatorial central–eastern Pacific, both showing increases of water vapor during major El Niño events as expected. However, the magnitude of drying in the TCWV field over the western Pacific is much weaker than that of moistening over the central–eastern Pacific, while the UTH field exhibits equivalent magnitude of drying and moistening. Furthermore, the drying in the UTH field covers larger areas in the tropics. The difference in their patterns results in an opposite phase in the time series during a major El Niño event when a tropical average is taken. Both UTH and TCWV are closely correlated with major climate indices. However, they have significantly different lag correlations with the Niño 3.4 index in both the sign (positive or negative) and lag time over tropical oceans. View Full-Text
Keywords: upper tropospheric humidity; total column water vapor; satellite observation; HIRS; SSM/I; El Niño upper tropospheric humidity; total column water vapor; satellite observation; HIRS; SSM/I; El Niño
►▼ Show Figures 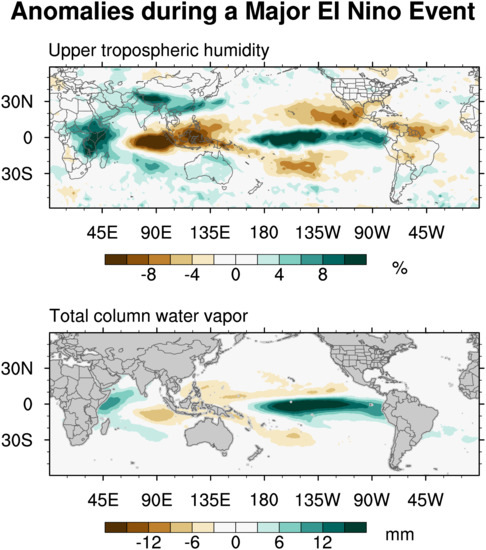