The Landsat archives have been made freely available in 2008, allowing the production of high resolution built-up maps at the regional or global scale. In this context, most of the classification algorithms rely on supervised learning to tackle the heterogeneity of the urban environments. However, at a large scale, the process of collecting training samples becomes a huge project in itself. This leads to a growing interest from the remote sensing community toward Volunteered Geographic Information (VGI) projects such as OpenStreetMap (OSM). Despite the spatial heterogeneity of its contribution patterns, OSM provides an increasing amount of information on the earth’s surface. More interestingly, the community has moved beyond street mapping to collect a wider range of spatial data such as building footprints, land use, or points of interest. In this paper, we propose a classification method that makes use of OSM to automatically collect training samples for supervised learning of built-up areas. To take into account a wide range of potential issues, the approach is assessed in ten Sub-Saharan African urban areas from various demographic profiles and climates. The obtained results are compared with: (1) existing high resolution global urban maps such as the Global Human Settlement Layer (GHSL) or the Human Built-up and Settlements Extent (HBASE); and (2) a supervised classification based on manually digitized training samples. The results suggest that automated supervised classifications based on OSM can provide performances similar to manual approaches, provided that OSM training samples are sufficiently available and correctly pre-processed. Moreover, the proposed method could reach better results in the near future, given the increasing amount and variety of information in the OSM database. View Full-Text
Keywords: openstreetmap; landsat; urban remote sensing; built-up detection openstreetmap; landsat; urban remote sensing; built-up detection
►▼ Show Figures 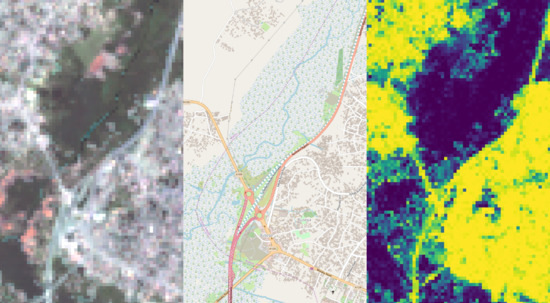