Upgrading all slums in Lagos by 2030 will an ambitious task, given that more than 70% of its residents resides in slums. Furthermore, there is no recent study identifying neither the slums nor their temporal growth/development pattern in Lagos that can backstop any slum management initiative. This study aims to contribute by applying object-based image analysis and intensity analysis to map and link patterns and processes of slum growth in Lagos. RapidEye imagery from 2009 and 2015 were used to create maps for each time point for six land use categories (water, vegetated area, open space, road, slum, and other urban). Intensity analysis was applied to quantify the annual intensity of changes at the category and transition level. An overall accuracy (and kappa coefficient) of 94% (0.9) and 89% (0.86) were achieved for the 2009 and 2015 land use and land cover maps, respectively. This study showed that slums in Lagos have increased spatially during the time interval studied, with a total net gain of 9.18 square kilometers, influenced by the increase in population, mainly due to in-migration to Lagos. However, this study also revealed that slums were actively losing and gaining land area between 2009 and 2015, with an annual gain and loss intensity of 10.08 and 6.41, respectively, compared to the uniform intensity of 3.15. The gain was due to poor maintenance of buildings and encroachment onto available spaces (water and open space), while the loss was attributed to gentrification and demolition processes. A systematic process of transition was observed between slums and other urban (and open space) areas in the interval studied, and this process was mainly influenced by the Lagos state government. This analysis is crucial for designing policy interventions to manage slum growth in Lagos. View Full-Text
Keywords: slum; object based image analysis; intensity analysis; Lagos slum; object based image analysis; intensity analysis; Lagos
►▼ Show Figures 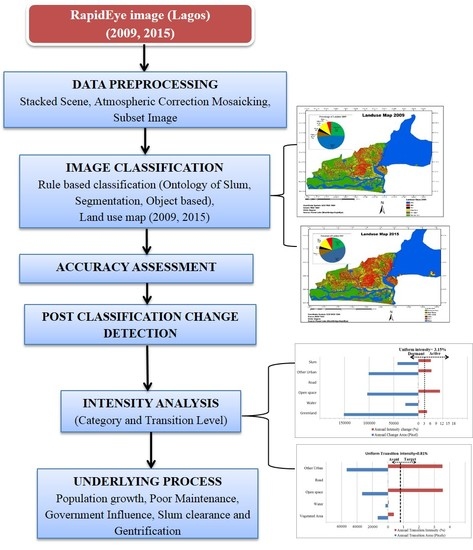