We verified an algorithm using multi-wavelength Mie-Raman lidar (MMRL) observations to retrieve four aerosol components (black carbon (BC), sea salt (SS), air pollution (AP), and mineral dust (DS)) with in-situ aerosol measurements, and determined the seasonal variation of aerosol components in Fukuoka, in the western region of Japan. PM2.5, PM10, and mass concentrations of BC and SS components are derived from in-situ measurements. MMRL provides the aerosol extinction coefficient (α), particle linear depolarization ratio (δ), backscatter coefficient (β), and lidar ratio (S) at 355 and 532 nm, and the attenuated backscatter coefficient (βatt) at 1064 nm. We retrieved vertical distributions of extinction coefficients at 532 nm for four aerosol components (BC, SS, AP, and DS) using 1α532 + 1β532 + 1βatt,1064 + 1δ532 data of MMRL. The retrieved extinction coefficients of the four aerosol components at 532 nm were converted to mass concentrations using the theoretical computed conversion factor assuming the prescribed size distribution, particle shape, and refractive index for each aerosol component. MMRL and in-situ measurements confirmed that seasonal variation of aerosol optical properties was affected by internal/external mixing of various aerosol components, in addition to hygroscopic growth of water-soluble aerosols. MMRL overestimates BC mass concentration compared to in-situ observation using the pure BC model. This overestimation was reduced drastically by introducing the internal mixture model of BC and water-soluble substances (Core-Gray Shell (CGS) model). This result suggests that considering the internal mixture of BC and water-soluble substances is essential for evaluating BC mass concentration in this area. Systematic overestimation of BC mass concentration was found during summer, even when we applied the CGS model. The observational facts based on in-situ and MMRL measurements suggested that misclassification of AP as CGS particles was due to underestimation of relative humidity (RH) by the numerical model in lidar analysis, as well as mismatching of the optical models of AP and CGS assumed in the retrieval with aerosol properties in the actual atmosphere. The time variation of lidar-derived SS was generally consistent with in-situ measurement; however, we found some overestimation of SS during dust events. The cause of this SS overestimation is mainly due to misclassifying internally mixing DS as SS, implying that to consider internal mixing between DS and water-soluble substances leads to better estimation. The time-variations of PM2.5 and PM10 generally showed good agreement with in-situ measurement although lidar-derived PM2.5 and PM10 overestimated in dust events. View Full-Text
Keywords: Raman lidar; mixing state of aerosols; aerosols; air pollution aerosols; mineral dust; black carbon; marine aerosols Raman lidar; mixing state of aerosols; aerosols; air pollution aerosols; mineral dust; black carbon; marine aerosols
►▼ Show Figures 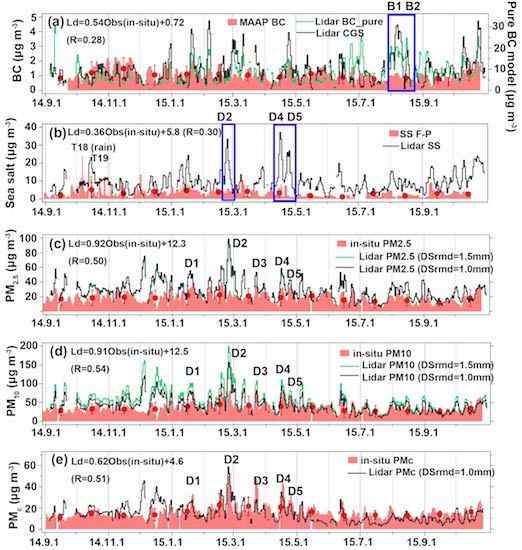