Sea surface salinity (SSS) links various components of the Arctic freshwater system. SSS responds to freshwater inputs from river discharge, sea ice change, precipitation and evaporation, and oceanic transport through the open straits of the Pacific and Atlantic oceans. However, in situ SSS data in the Arctic Ocean are very sparse and insufficient to depict the large-scale variability to address the critical question of how climate variability and change affect the Arctic Ocean freshwater. The L-band microwave radiometer on board the NASA Soil Moisture Active Passive (SMAP) mission has been providing SSS measurements since April 2015, at approximately 60 km resolution with Arctic Ocean coverage in 1–2 days. With improved land/ice correction, the SMAP SSS algorithm that was developed at the Jet Propulsion Laboratory (JPL) is able to retrieve SSS in ice-free regions 35 km of the coast. SMAP observes a large-scale contrast in salinity between the Atlantic and Pacific sides of the Arctic Ocean, while retrievals within the Arctic Circle vary over time, depending on the sea ice coverage and river runoff. We assess the accuracy of SMAP SSS through comparative analysis with in situ salinity data collected by Argo floats, ships, gliders, and in field campaigns. Results derived from nearly 20,000 pairs of SMAP and in situ data North of 50°N collocated within a 12.5-km radius and daily time window indicate a Root Mean Square Difference (RMSD) less than ~1 psu with a correlation coefficient of 0.82 and a near unity regression slope over the entire range of salinity. In contrast, the Hybrid Coordinate Ocean Model (HYCOM) has a smaller RMSD with Argo. However, there are clear systematic biases in the HYCOM for salinity in the range of 25–30 psu, leading to a regression slope of about 0.5. In the region North of 65°N, the number of collocated samples drops more than 70%, resulting in an RMSD of about 1.2 psu. SMAP SSS in the Kara Sea shows a consistent response to discharge anomalies from the Ob’ and Yenisei rivers between 2015 and 2016, providing an assessment of runoff impact in a region where no in situ salinity data are available for validation. The Kara Sea SSS anomaly observed by SMAP is missing in the HYCOM SSS, which assimilates climatological runoffs without interannual changes. We explored the feasibility of using SMAP SSS to monitor the sea surface salinity variability at the major Arctic Ocean gateways. Results show that although the SMAP SSS is limited to about 1 psu accuracy, many large salinity changes are observable. This may lead to the potential application of satellite SSS in the Arctic monitoring system as a proxy of the upper ocean layer freshwater exchanges with subarctic oceans. View Full-Text
Keywords: SMAP; sea surface salinity; Arctic Ocean; sea ice; river discharge; Arctic Gateways SMAP; sea surface salinity; Arctic Ocean; sea ice; river discharge; Arctic Gateways
►▼ Show Figures 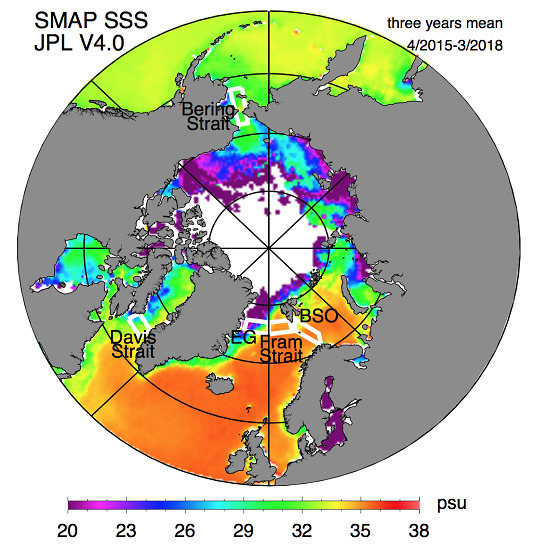